The Keele graffiti wall, an urban art treat for subway riders passing between Dundas West and Keele stations on the TTC Bloor-Danforth line, appears to have been given a clean canvas and a new mural is in the midst of being painted.

blogTO reader Amanda T emailed us to let us know that she's not particularly happy with the sudden covering of the eclectic mishmash that was there before, nor the choice of theme for the new project being started. "I can't imagine the artists who contributed to this wall over the years are taking it lightly. And if the owners were going to commission something... really? A wilderness silhouette?" she writes.

I just so happened to be in the area, so I stopped by to check it out. I wasn't able to confirm whether or not the new mural was commissioned by the owners of the building, nor were any artists on site to fill me in on the new project. But I did meet a giant, roaring grizzly bear. 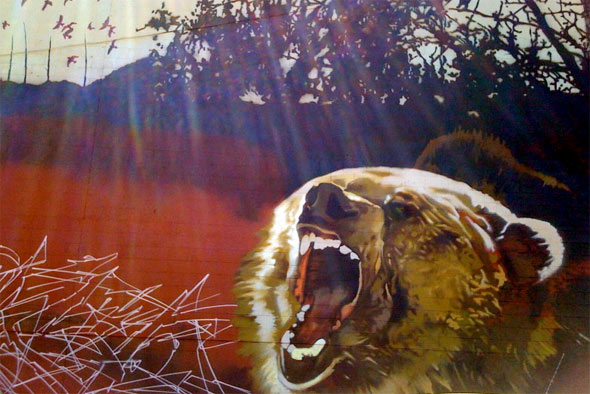 Just one end of the mural, which appears to be set up to span the entire wall, has any extensive work done on it - trees, birds, and the roaring grizzly bear.

It also appears that at least one graffiti artist has already disregarded the "mural in progress" notice and covered over a section of the new background with some work reminiscent of what graced the wall before. 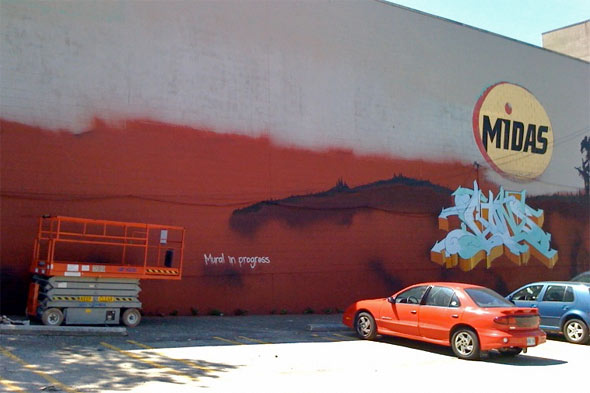 I guess we'll just have to wait and watch to see what develops on the wall in the coming days. Or is anyone reading this is more in touch with the goings on in the Toronto graffiti scene, perhaps they can catch us up to speed with what's being done here and whether it has the support of the graffiti community or not.