Arts Etobicoke and Lakeshore Arts launched Art on the Move on Monday in the Distillery District.

Art on the Move is a three-year project that paired Toronto vehicle owners (public, private, and not-for-profit) with visual artists and together they conceptualize creative concepts that community groups brought to life.

Torontonians should keep an eye out on the streets... for vehicles that have been given a large dose of community-driven artistic flare. 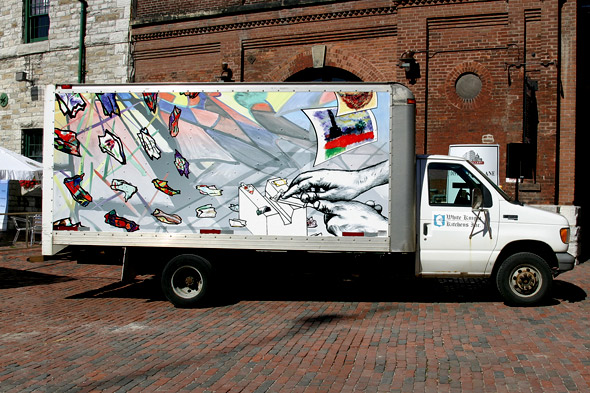 Amir Akbari, mural artist and Lead Project Artist for Urban Arts Toronto, partnered with White Knight Kitchens, Inc., an Etobicoke-based kitchen cabinetry business, to add an almost whimsical mural to their company van. Working with seniors from the Geriatric Admission Unit at CAMH (a program that focuses on behavioral and psychiatric disturbances in the elderly), they created a wood-working-themed painting. 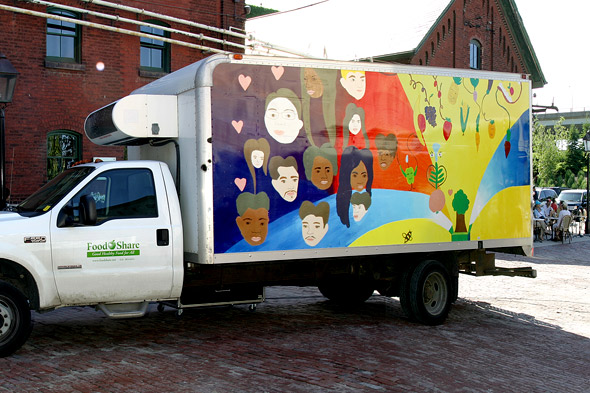 These three vehicles were unveiled at Monday's debut and are the first of fifteen artistic vehicle projects to be launched onto Toronto's city streets.

Of the initial three, I think the TTC bus (with so many elements to keep the viewer captivated) stands out. But my favorite is the White Knight Kitchen's truck and the painted whimsy of wood chips flying off the block like birds carrying artistic inspiration. It definitely left the crowd something to think about.