Even for a literary nerd like myself, if there's one thing I find truly overwhelming, it's the world of comics and graphic novels. Call me weird, but it's a feeling I actually relish; there are simply so many genres, artists, styles and series that I can't help but want to read them all. An impossible goal, I know, but it's events like the Toronto Comic and Arts Festival (TCAF) that let me try a little bit of everything.

Held in the Toronto Reference Library this past weekend, the floor's tightly packed aisles were sure to offer something for even the most casual of readers, with authors and artists from across Canada, the U.S, and around the world making appearances. With the abundance of prints, posters, shirts and books splayed across the event's tables, any semblance of self-restraint was thrown out the window, as I joined the cash-carrying masses in buying books merchandise from some of my favourite artists. 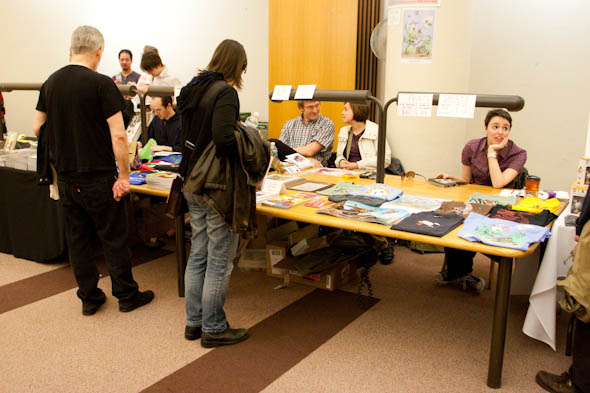 Wandering up and down the rows of tables was a treat in and of itself, as it allowed me to encounter both art and artists that I may not have experienced otherwise. Besides the usual comic-book fare, a number of artists had a variety of prints, storyboards, and sketches, ranging from animation to "mainstream" comic book projects. Some tables had nicely crafted, self-printed books, while others, like John Campbell, had a selection of mini-comics offered for only a few dollars - a great way to entice apprehensive or cash-strapped fans into experiencing a new comic with minimal spending. 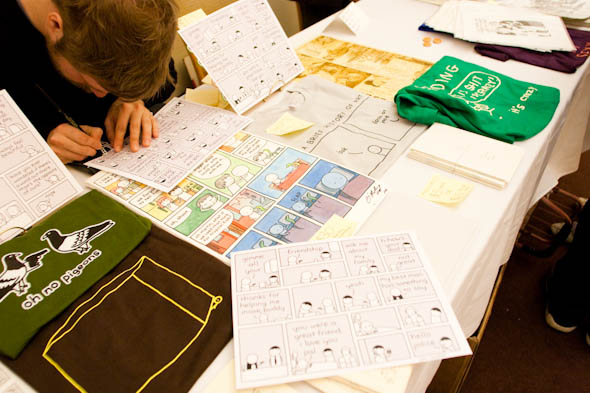 A large portion of my TCAF weekend was spent in what I affectionately refer to as the webcomic corner. Despite only being introduced to the larger world of trade paperbacks in the last year, I've been reading webcomics for almost as long as I've been on the internet. Much to my delight, some of my favourite webcomic artists and authors, including Richard Stevens, Chris Hastings, Kate Beaton, Ryan North, and even Jonathan Rosenberg, were all in attendance. Nervousness be damned, I managed to express my gratitude to most of them, and even get some signatures in the process.

But much like any other convention or festival, there was an abundance of talks, presentations and readings spread out over the two-day event. Scheduled programs included those on editing and promoting comics, the future of the medium, and, of course, signings. Scott McCloud, who many are familiar with through his meta-comic Understanding Comics: The Invisible Art, was on hand for a number of panels, as were various other authors and comic industry players. 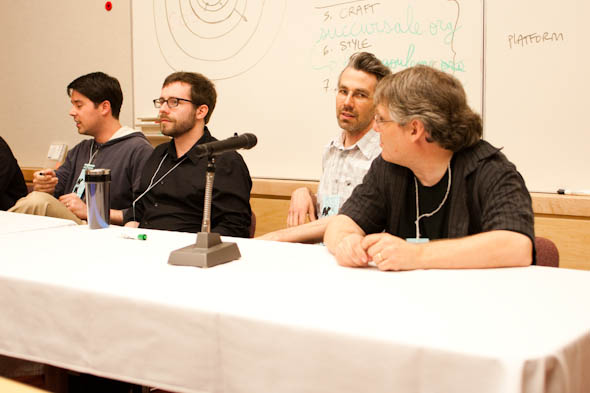 My Sunday afternoon was spent at one talk in particular, entitled "Newspapers, Comic Books, and The Internet" and moderated by The National Post's graphic columnist Steve Murray. Including the likes of Scott McCloud, Richard Stevens, Stuart Immonen, Brendan Buford (of King Features Syndicate), and John Martz, the group embarked on a very interesting discussion concerning the pros and cons of syndication, the future of the newspaper comic, and the effect that technologies like multi-touch and the Kindle are having upon the distribution and creation of comics.

To be completely honest, what I experienced was but a small taste of what the weekend had to offer; for all the authors and artists that I visited, there were at least twice as many that I couldn't. Yet, I enjoyed every minute of it, and look forward to further burying myself in the world of comics and graphic novels in anticipation of next year's event.

Who did you see at this year's TCAF? Who should I check out in the future? Leave your TCAF stories and comments here.