I was all ready to spend Saturday bouncing from one CONTACT opening to another when the NHL ran a little interference. You see, despite my passion for the arts, I'm a degenerate hockey fan, and the prospect of missing Crosby and Ovechkin lining up against one another in the playoffs was more than a little unappealing. I had assumed (wrongly) that the game would be a Saturday evening affair, but the American television networks prefer to schedule these things in the afternoon, so I was forced to alter my plans accordingly.

Thankfully, most of the openings on Saturday extended until 5 or 6pm, which meant that I could hightail it to at least three following the game. Knowing that I'd be attending a small number in a short period of time, I decided that it'd be a good idea to select each exhibition carefully. Making good use of the game's intermissions and the festival's magazine guide, I settled upon a few shows that I hoped would make for some interesting comparisons. So over the next couple of days I'll be posting my thoughts and reactions to these exhibitions. On tap today is Susan Dobson's exhibit at The Department, Retail.

I was immediately intrigued by Dobson's work when I came upon its description and sample photograph in the festival guide. But, as is the case with most work in series-format, the visual impact of the actual show is difficult to do justice to in written form. Upon entrance to the gallery, the stark contrast between the white walls and the vivid blue skies of the prints is just wonderful. 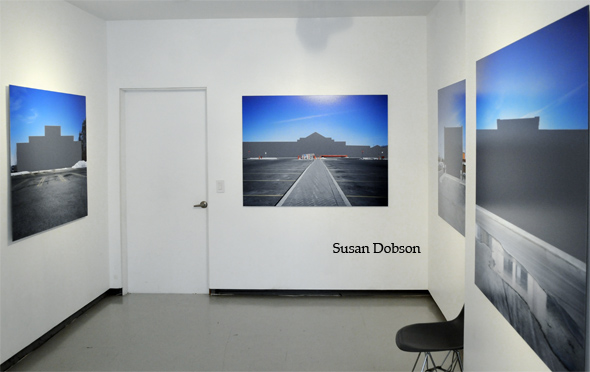 For Retail, Dobson photographed numerous big-box stores with empty parking lots that she then altered by masking the retail structures in a concrete grey tone. The great success of her work is the control of the formal elements of each photograph - in particular the vantage point and colour temperature - to give the sense that the landscapes depicted are both everywhere and nowhere at once. There's a definite indebtedness to Bernd and Hilla Becher here, but in the best possible way.

Throughout the latter half of the 20th century, the Bechers captured various industrial forms - like water towers, blast furnaces, storage silos and warehouses - in a series of crisp black and white photographs that they subsequently collected as a representative "typology" of the given form. To establish consistency and neutrality from one form to another, they always shot on overcast mornings, used the same frontal perspective and an elevated vantage point. When displayed in galleries, the images are invariably hung in a grid pattern that highlights the uncanny similarity from image to image.

With Retail, Dobson has also created a representative typology, one that effectively reveals both the profound banality and pervasiveness of such retail structures. At one point I was trying to be clever by identifying where each photograph was taken based on the unmasked surroundings. I then overheard Dobson say that most of the images were shot in and around Cambridge and Guelph. Considering that I assumed each one was taken around the GTA, it's pretty clear that her technique is effective.

Despite our understandable desire to guess at where the photos might have been taken, the point really is that they could have been taken anywhere in North America. The landscapes are so familiar because we've all seen them hundreds of times. But, bereft of cars and cast under such inviting blue skies, there's an ominous tone to these images. They subtly suggest our worry-free capitalistic complicity with the increasing hegemony that surrounds us.

Stayed tuned for tomorrow's post on Andrew Wright's Still Water and Geoffrey Pugen's Another Side of You.