Combustion Festival a Collaboration of Improv

ProjectProject's Julie Dumais is the mastermind behind the Combustion Festival, which has brought some of the hottest improv comedy acts to The Comedy Bar this week. Dumais assembled a program of improvised and interdisciplinary collaborations from more than 50 improvisers and artists from over 15 companies across North America, including Picnicface from Halifax and 4Track from New York.

I caught the late show Monday night and it had me in stitches. 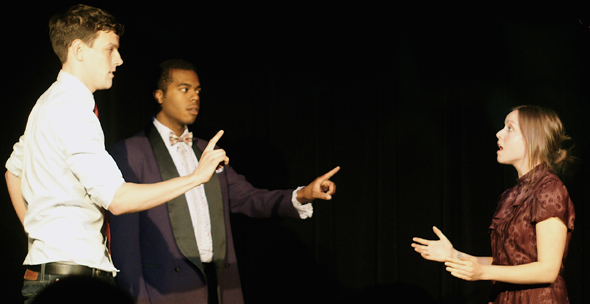 Typically, performers take suggestions from the audiences and make a sketch around a word or phrase. One of the funniest segments for me was when Mark Andrada (pictured in the first photo) interpreted the word crutch from the audience. He acted out a scene where he was a cantankerous store owner selling crutches. And a drunk one at that, playing on the theme word's interpretation of a vice as a crutch.

There were moments where the performers broke character and started laughing at their own scene on stage. Not the most professional, but you're pretty much laughing along with them by that point.

Tonight, part of the program features an internet simul-show-via-Skype-hookup as Al Connors and Cari Leslie of CRUSH improv take the stage in Toronto, while troupe-mates Brad MacNeil, Des Connors and Dave Lindsay perform at their own show in Ottawa. Should be interesting to see how they pull this one off.

Saturday's 8 p.m show is The Kid is Hot 2night showcase, featuring the top six improvisers left standing after an intense audience choice long-form elimination tournament which started in February with more than 64 improvisers. 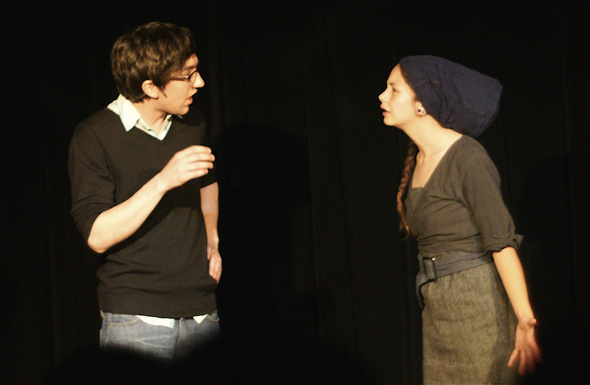 If you stick around for the 9:30 show, you'll see Winnipeg's Lee White and Steve Sim of CRUMBS, followed by Samurai Davis Jr. and Dim Sum's Super Mega Happy Fun Time Improv Show! I look forward to seeing exactly how Atlanta's Dad's Garage Theatre put together what they are describing as an "improv/Japanese game show/edible gross-out sensation."

You've still got tonight and tomorrow night to get your LOL on. There are two shows nightly, starting at 8 p.m. and 9:30 p.m. $8 per show or $12 for both shows each night.