I didn't really know what to expect when I made my way over to Nigel Nolan's latest show, Amuse-Bouche, at Le Gallery on Dundas West. I realize this is something of a fluff statement - one that writers often use to break the ice and get a post underway. But let me assure you: in this case, my intrigue was palpable. The main reason for this was the fact that I had taken a peek at the webpage that Nolan put together in anticipation of the show. The combination of the statement "I have some hot Argentine boys for sale" and a series of photos that seem to gesture to amateur pornography is, of course, a pretty good way to generate such inquisitiveness.

Even after spending some time at the show, I'm not sure that I was able to answer all of the questions it engendered. But that's not necessarily a bad thing. If something's actually provocative, it tends to resist being fixed or labeled too easily and quickly. And while I think this particular show is less shocking than perhaps its meant to be - what with the graphic sexual imagery and all - its numerous artistic interrogations are fascinating. 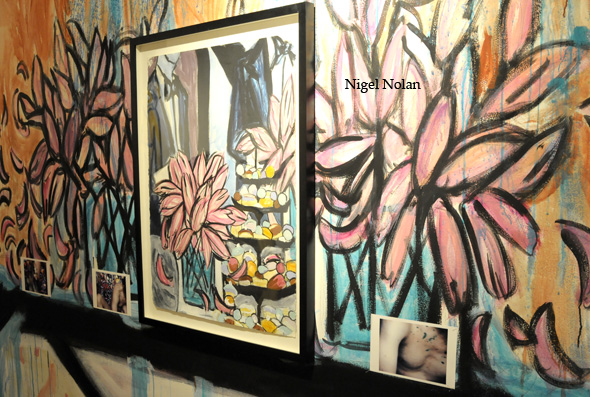 Of these so-called "interrogations," two strike me as particularly noteworthy. The first is Nolan's willingness to explore, quite explicitly, the degree to which art (and in particular portraiture) necessarily objectifies the subject it depicts. Nolan adopts an economic metaphor to highlight this little considered element of the artistic process - hence the previously mentioned tag-line "...boys for sale." In a very real sense, the "boys" depicted in Nolan's work are, indeed, for sale. That it's their image rather than their bodies doesn't change the fact that they're the object of an exchange (currency, if you will) in which they're delimited by Nolan's representational choices. 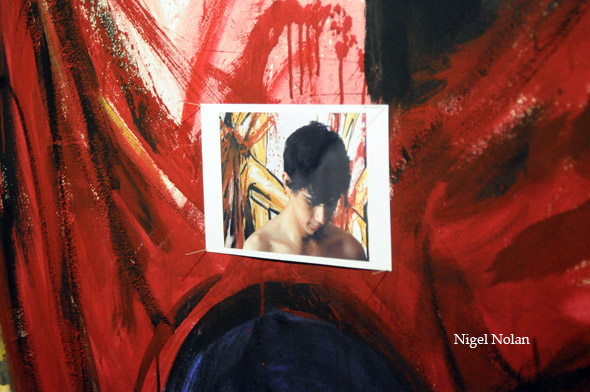 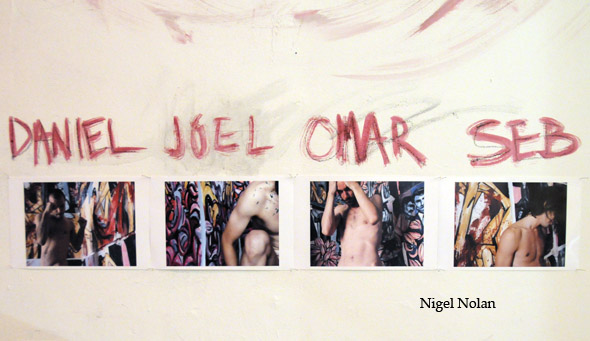 The second interrogation relates to the above questions/issues, but explores them on a formal level. The first thing that a viewer notices upon arrival at Le Gallery is that the artwork is not limited to the framed and hung pieces: wall paintings span the entire gallery. The relationship between what's framed and unframed contributes to the complexity of the questions discussed above. The chief role of the frame is, after all, to divide the work of art from its other, what might awkwardly termed non-art or, if you prefer, reality. So what happens when an artist "breaks" the frame and insinuates the outside into the work of art proper? 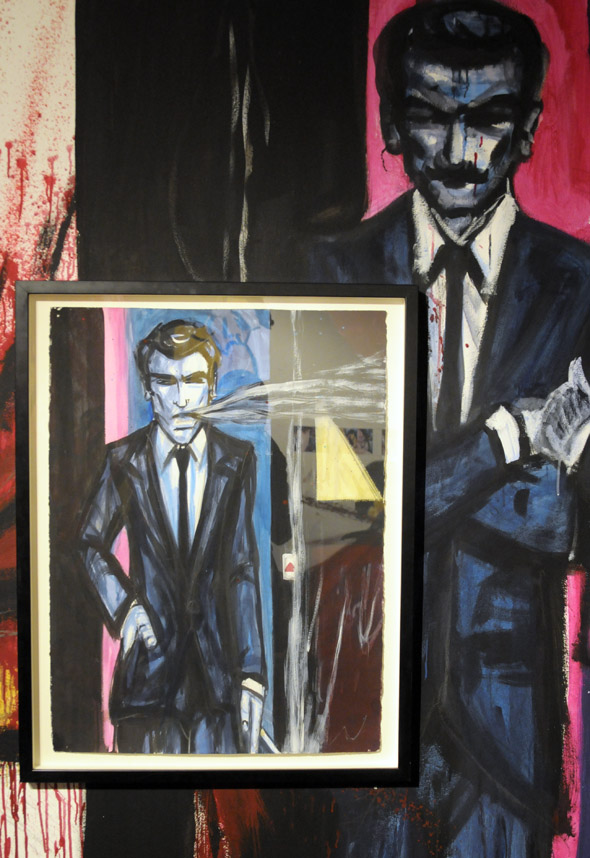 Well, amongst other things, it exposes the fact that the frame's ability to separate art and life is tenuous at best. Perhaps my favourite aspect of Nolan's installation is the way in which it appears as though the works have "exploded" onto the walls, unwilling to be contained. Combine this with the fact that he remunerates his "boys" with 10% of the sale price of works in which they're depicted, and it's clear that beyond the theoretical questions he poses about artistic objectification, Nolan is keen to remind us that the people who make such work possible exist independently of their representation on paper or canvas. 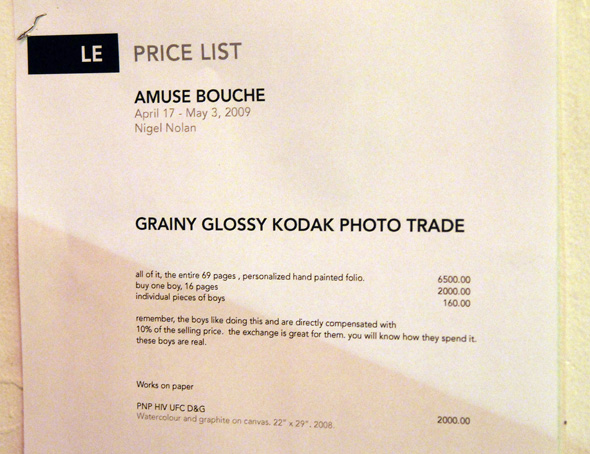 Despite the obvious sophistication of this show, there are, however, a few elements that diminish its ability to provoke. Ironically, I get the distinct feeling that these elements are precisely those that Nolan believes are the most controversial. In his own statement about Amuse-Bouche, he offers the following warning: "If you are unfamiliar with the vulgarities of art, are offended by savage content, or have no idea what I am talking about, now is your chance to flee, you coward." This determination to challenge the viewer would be great if it didn't seem so disingenuous and immature. One of the most difficult aspects of artistic production is the need to trust one's audience, to resist being didactic in favour of fostering independent critical engagement. 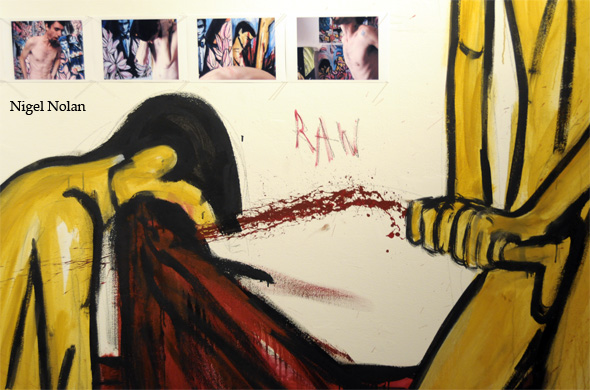 Wall paintings that feature the word "raw" written beside a penis ejaculating blood also strike me as moments of insecurity rather than confidence. Such imagery seems graphic for the sake of being graphic, which does little to get me thinking. But, that being said, the correlation between sexuality and violence is a natural complement to the show's major themes. Criticisms aside, Amuse-Bouche is definitely an engaging installation/show, and worthy of a visit so that viewers can draw their own conclusions about the significance of its various interventions.

Amuse-Bouche runs until May 3rd at Le Gallery