Unlike television, being famous on the internet poses a bit of a conundrum; fame and popularity are achieved from the other side of a screen, which often means that fans are far more familiar with a project itself, rather than the person behind it.

And while you might be the biggest webcomic fan on the internet, chances are, you wouldn't be able to pick very many authors out of a crowd if your life depended on it. Unless the crowd was composed entirely of web comic authors, of course.

Which, coincidentally enough, was exactly what happened last night, as North York Central Library, in association with The Beguiling, hosted "Talking Webcomics". One of the Toronto Public Library's many Keep Toronto Reading events this month, the evening featured some of the very best web comic authors working and living in Toronto. Attendees included the likes of Kate Beaton, Willow Dawson, Emily Horne, Brian McLachlan, and Ryan North - all of whom have successful, and regularly updating series'.

Moderating the event, Chris Butcher of The Beguiling made it clear that, there are actually more authors in Toronto than you'd initially think - "over 30 that I had to choose from," he mentions in his introduction. And those are just some of the internet's more well known authors; the room was clearly packed full of more up and coming artists looking to learn a thing or two about succeeding on the web. 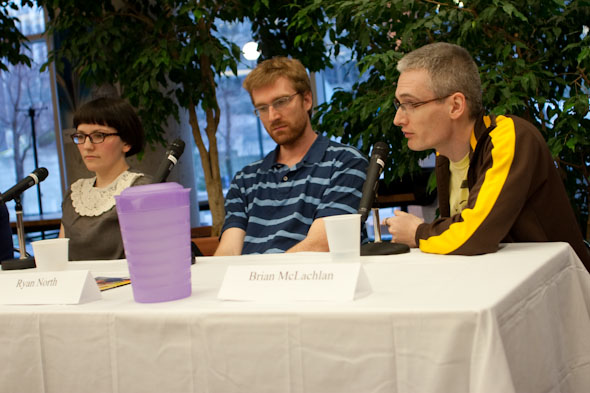 In the hour and a half panel discussion, both Butcher and audience members fielded questions on the creation, updating, and promotion process behind such popular webcomics as Ryan North's Dinosaur Comics, or Kate Beaton's Hark! A Vagrant.

"Newspapers can't be offensive to anyone, and have to be accessible to everyone," explained Brian McLachlan, on his decision to work online. "You get what's essentially the same Marmaduke comic every five days."

That being said, while many cartoonists can make a living working in the print world, doing the same online was one of the evening's hot topics. Some, like North, have supported their comics through the sales of t-shirts, or by compiling print volumes of their strips. Others, like Emily Horne of A Softer World, and Willow Dawson's 100 Mile House, still remain involved in the traditional print industry to support their endeavors on the web. 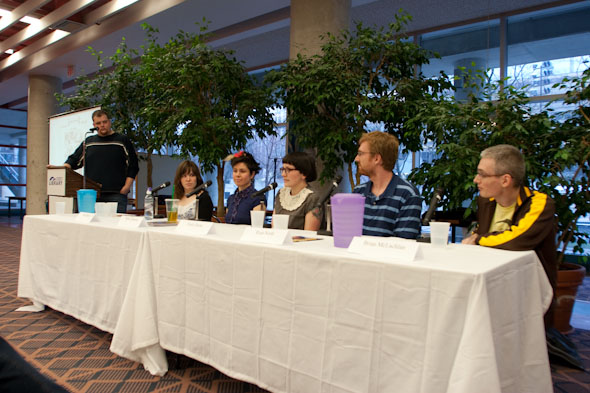 But what I found particularly interesting was how much each artist has embraced and fostered the growth of Toronto's webcomic community. Both Beaton and Horne, for instance, lived on opposite sides of the country before finally moving to Toronto in recent years.

"Being in a more central place [like Toronto] means that I can meet up with these people for the first time," explained Horne, of her move to the city, and being embraced by other artists already living in the area. Currently, she shares studio space with four other artists in the city.

While the evening was a superb way to learn more about the burgeoning community of webcomics, both in Toronto and on the web, it won't be the only chance for fans to interact with some of their favourite online authors and artists. Both the Toronto Public Library and The Beguiling will also be hosting the Toronto Comic Arts Festival (TCAF) this May, where most of Tuesday's panelists should be in attendance.

To learn more about the event, and the lovely cartoonists in attendance, make sure to check out TCAF09's website for full details. Best of all, attendance is free!