I went to Massive Party and all I have to show for it is a hangover and a stack of pancakes. But not just any pancakes, these ones were created by Texas artist Franco Mondini-Ruiz who was holding fort at his Morsels for the Masses: Populist Art at Popular Prices! installation.

In the early hours of the evening he was hawking his stuff for hundreds of dollars, but in the waning moments I managed to negotiate him down to $5 and a cheap feel (his offer) before settling at $25 for the stack. Good thing I got home just before the downpoor or this thing would have disintegrated, butter and all.

And, oh yeah, about Massive Party. I was talking to one of the organizers who said they were thrilled by the turnout. Apparently they sold 1,600 tickets which at $125 a pop makes for some pretty sweet fundraising coin for the AGO.

The party itself though (and this was a consensus among almost everyone I spoke with) was lacking some of the flair of previous years. There was no equivalent to Thrush Holmes and his crew live painting or Sebastien Granger dry humping speakers.

Instead, 2009 seemed to be more about the space. And what a space! But I can only guess this tied the organizers' hands considerably in terms of what they were able to do. With hundreds of million dollars worth of artwork hanging on the walls there's only so much booze and revelry the AGO's insurers and Board of Directors could likely stomach.

Somehow I completely missed Jay Isaac's ice sculpture. But other installations, videos and performance art playing on this year's Uprising theme were pretty obvious (if a bit forced) including riot police at the entrance, random protesters with picket signs (nothing AIG or GM related) and a homage to Yoko Ono and John Lennon's Montreal bed-in.

All in all a good party for a worthy benefactor, if not exactly revolutionary. 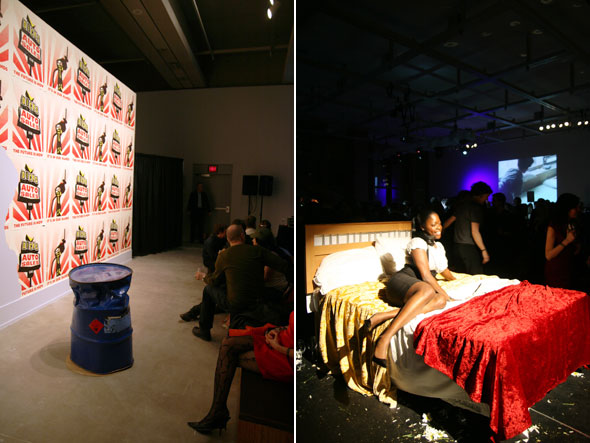