My memory can be a little hazy at times. When I walked into an exhibit at the Gallerie Celine-Allard that interpreted the childhood fairy tale Little Red Riding Hood, I was stuck at how certain aspects did not remind me of the story at all, notably the hand-drawn buckets collecting sap from the paper panels acting as maple sugar trees.

As I walked in between panels, I saw a video that showed the artist making a doll out of bits of red and white material. Again, my memory sucks... but I distinctively remember and recognize an important element that was missing from the story. Where's the wolf?!

Le petit chaperon rouge, or Little Red Riding Hood, may seem like an odd topic to review here but the show carries a cultural impression that isn't so obvious. Exhibited at the Gallerie Celine-Allard at the Centre francophone de Toronto, local artist Isabelle Mignault explores an inherited narrative of a tale that has long fascinated and haunted her. While many liberties were taken to recreate the story, the majority based on what her father told to her as a child (remember that forest with those sap-collecting buckets?), but these ambiguous components are only a layer of what's not being shown instantly: an identity that teeter-totters on two Canadian cultures.

As I was reading her bio, I was stuck by the similarities Mignault and I possessed: born to Quebecois parents in an English city, introduced to the English language late in childhood, spent our formative years trying to identify which culture we should belong to when we couldn't classify to either one: a French-speaking individual but not Franco-Ontarian nor Quebecoise or misunderstood as Anglophones when our native tongues sounded not-so-French. It's interesting that Mignault and I share these similar experiences, providing an eye opening insight that other individuals of the similar and different stock may have experienced the same in our urban melting pot.

The exhibit examines that dual relationship, yet it's not too philosophical and abstract that it will detract you from visiting. These bits of her imaginative past are explored through video, sound, and music, the latter which I couldn't identify clearly as it was muffled by the buzz in the room on opening night.

Even if you don't identify with the French culture or the small francophone community that exists in our city, the simplistic presentation of this exhibit attempts to ask each visitor to explore their cultural identity in this not-so-passive approach of a familiar childhood fairytale. 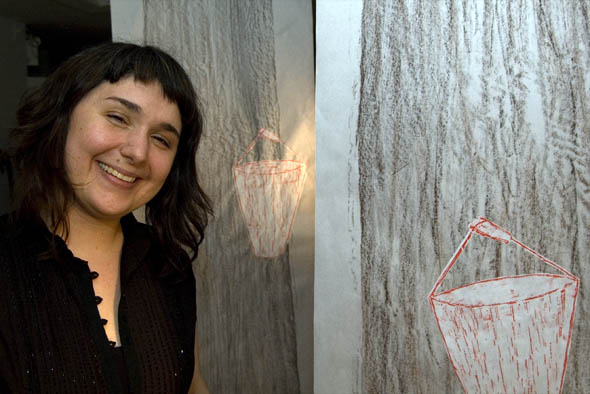 Le petit chaperon rouge is open until March 20th. Monday through Friday, 11am to 4pm, at the Gallerie Celine-Allard, at the Centre Francophone de Toronto, 20 Lower Spadina.