Ron James is taking his Mental As Anything stand-up tour across Canada, making a stop in Toronto for six shows at the Winter Garden Theatre.

At last Thursday night's opening, it was my first night taking in a stand-up comic in such a large venue. For a Maritimer who's often labelled "the funniest man in Canada," I expected to be splitting my sides laughing. My ribs are still firmly intact.

I'm all for bringing more LOLs to the masses, but I think that, in spite of a rather physical stage presence, a lot of his material was lost on the huge crowd because they couldn't see his animated facial expressions close enough. I'd take Nova Scotian Nikki Payne at The Comedy Bar any day over a show like this.

Granted, it's been five years since he did a stand-up show in Toronto. But with Jerry Seinfeld selling out four shows at Massey Hall later this month, James' schtick will have a harder time putting so many bums in seats here. 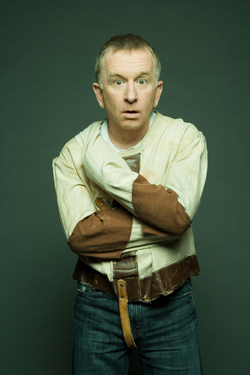 As funny as he can be, it's also a little arduous sitting through an hour-and-a-half-plus long show without an intermission. Or without a bar nearby to help make the evening more of a night out than just sitting there idly while one guy tries to keep your attention for the entire show.

Lucky for me, I had a fellow Maritimer sitting next to me. His snide commentary was almost as funny as the jokes spouted on stage.

A lot of James' material took jabs at our flailing economy and the recession: "My stock portfolio is nose-diving faster than a kamikaze pilot with a rabid ferret in his pants." In these leaner economic times, people seem to crave laughter all the more.

There was a really funny bit about cottagers feeling compelled to wave earnestly at each other as their boats pass by in cottage country. James related this to the city folk who'd never be caught waving at each other on this city's streets downtown.

I wonder how much of his material translates well in other cities across Canada?

James was at his best when he broke into his east-coast brogue, telling tales of his upbringing. Especially the ones about his mother and the things she'd tell him to put the fear in him, told in falsetto with a prominent east-coast brogue: "I once knew a boy who was killed by his shadow."

In spite of his rapid-fire delivery, rife with alliteration, some of the material fell rather flat. Which James often reacted to by berating the audience. Maybe if the audience was more lubed up, or in a smaller venue, they'd feel closer to the material too.

I left the show feeling mostly entertained by James' Canadian comedic jabs and jibes. But I expected more of a comedic knockout punch.