Free Speech Throws a Party on its Second B-Day

At Free Speech I learned way more about Eden Hertzog's father's balls than I ever thought I'd know. That's not even a euphemism - I mean his scrotum, the sad bit of man-flesh that cradles the testes. Eden, who opened the monthly showcase of Parkdalian storytellers, was reading from her memoirs. ("I'm young, but I've had a good life.") She was one of four artists who girded their loins to brave the stage in the upstairs dining room at Tinto on Roncesvalles Monday night, to celebrate Free Speech's second birthday.

She even got a cake out of it. (But spoiler warning: she baked it herself)

Speaking of balls, I know very little about Terry Goldie's, this despite the York professor's latest tome's obvious and autobiographical content (it bears the germanically-mashed up title queersexlife). Disappointingly, entirely unlike something G.B. Trudeau would have portrayed Gay Talese as having written.

You're still with me?

Actually Terry's memoir is quite thoughtful, reflecting very much the frank academic in him. I had questions for him after the show, but I'm shy like that some times.

This next bit is hard to describe: I left the upstairs room momentarily to get a beer (Tinto serves Mill Street) and when I came back there was a short lady shouting about what appeared to be shoplifting. I'm not entirely sure. There was aluminum foil and a multimedia segment and she waved an iPhone around for a bit and did a little leper's dance and someone told me afterwards that that blurry red jacket was Lisa Marie DiLiberto of FIXT POINT THEATRE.

Brian MacMillan (bright yellow shirt pictured at top) stepped in between acts with his upbeat love ballads. He's like John Mayer, but better looking, and probably wouldn't appreciate being compared to John Mayer. He and host Johan Hultqvist kept the show in gear with storytelling of their own (mostly about Johan's shoes).

A relaxing and thoughtful evening - and Tinto's Colombian cuisine is top-notch. If you're in the neighbourhood on February 23rd, I definitely recommend you check out the next group of two men and two ballsy women: Russell Smith, Marianne Apostolides, Andrew Westoll and Ida Nilsen (yaya Vancouver!). 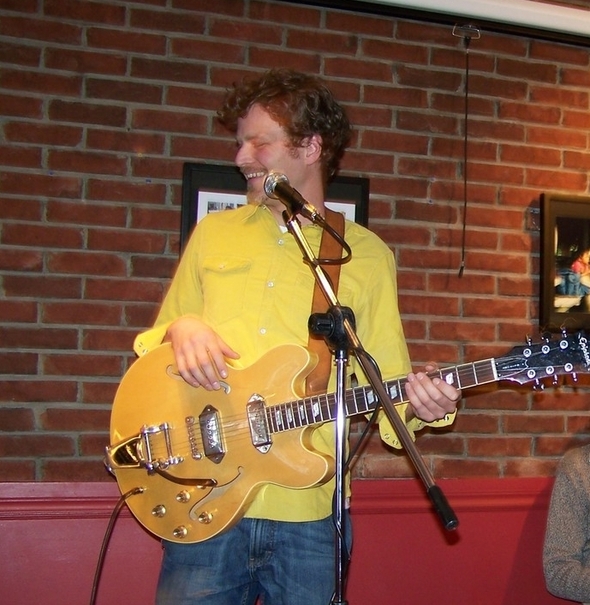 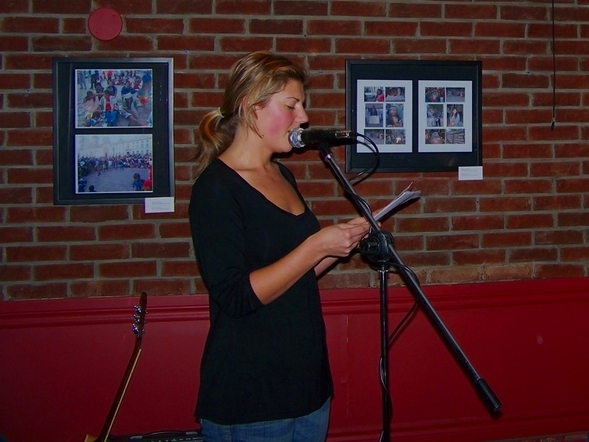 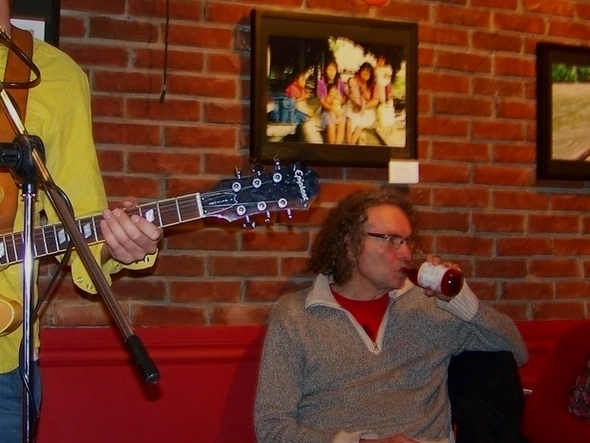