The winners of the BMO 1st Art! Invitational Student Art Competition were recently unveiled and are currently on display at the Museum of Contemporary Canadian Art.

This is the 6th annual competition celebrating the creativity of recent post-secondary art program graduates from across the country. Deans and instructors from various institutions each nominated three individuals who they felt were justified to compete against the hundreds of other national applicants. An art-savvy selection committee then had the task of selecting one overall national winner, along with a winner from every province and territory.

Dawn Cain, Curator of BMO Financial Group's Corporate Art Collection stated that, "early BMO presidents from the 1800's were actively involved in the arts as notable collectors, and one was also Chairman of the National Gallery of Canada." The national winner receives $5,000 and their work becomes part of BMO's corporate art collection, which includes over 6,000 pieces worldwide that were created by historical and contemporary Canadian artists dating as far back as 1817. It also means being shunned by your family - in the case of Jeremy Jeresky, this year's winner. 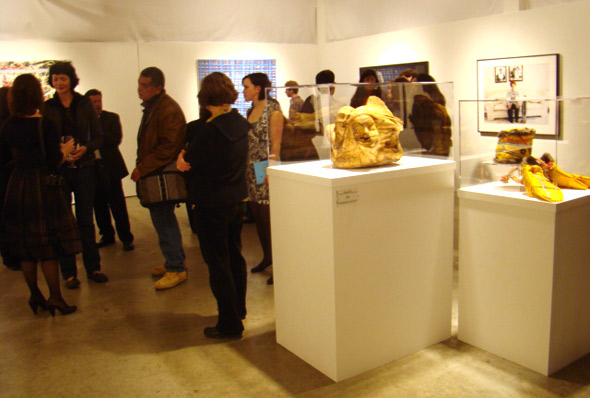 This Alberta student's piece "Ignition" is a photograph taken of him on a roof in a self-made flight suit. It's actually the seventh piece of eight in a photo series entitled, "Flight of Fancy Series Two." As a group these photographs tell the story of Jeresky's grandfather, whose passion to fly lead him to building jet packs. His great-grandfather also had similar ambitions, and both were discarded with embarrassment and negativity by family members. Jeresky seems to be following the same path of family isolation as he no longer is welcomed by his family after disclosing this hidden secret from the past. "I'm happy to have done this and not ashamed at all. In fact I'm already working on a third series that will reveal some (dirty) secrets about my father", he states.

Every winner was brought to Toronto to attend the opening reception, and each regional winner received a $2,500 cash award. The display of works as a whole is not necessarily mind-blowing, but the range of artwork themes and mediums definitely reflects the regional diversity across the country, and presents a national snapshot of new Canadian talent.

I think that it's encouraging to see financial institutions picking up support for the arts, following the cigarette companies being told to butt out. As well, with the current government cutting millions of dollars in arts funding, artists may end up needing all the corporate support they can get.

All 14 winning entries are currently on display at MOCCA, with the exhibition running until October 26, 2008. Admission to the gallery is free and hours of operation are Tuesday through Sunday, from 11am to 6 pm.