Words and Music and the Art of Time

The Art of Time Ensemble is at it again with their Words & Music program, kicking off their 10th anniversary season last night at Harbourfront Centre's Enwave Theatre. I was rather impressed with last season's America and The Black Angel, where Artistic Director Andrew Burashko explored the relationship between literature and music, and this new program continued in that tradition.

Introducing last night's show, CBC's Laurie Brown said that she always attends Art of Time Ensemble concerts because you never know what the hell you're going to see. While Burashko, in his opening comments, dedicated the evening's performance to Stephen Harper and the "fatcat elitist snobs."

Last time I caught an Art of Time Ensemble performance was when Barenaked Ladies' singer Steven Page covered his favourite artists. I was pleasantly surprised by the variety of genres and arrangements given. Last night's program offered another eclectic selection of music inspired by literature and literature inspired by music. 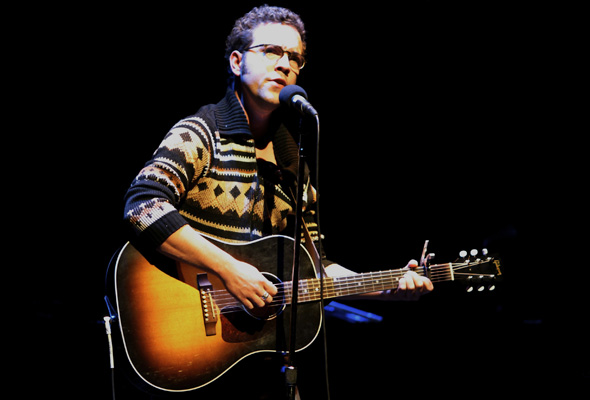 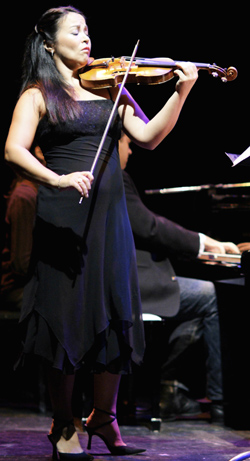 One of the highlights of last night's selections was when Ted Dykstra (top photo) and Rick Roberts performed a scene from the Dora Award-winning rock 'n' roll musical Fire, where the two channeled Jerry Lee Lewis and Jimmy Swaggart much to the audience's delight.

One of the more introspective works came from singer-songwriter Justin Rutledge (pictured above) who performed songs from his recent Man Descending album which was inspired by the collection of short stories by Governor General Award-winning author Guy Vanderhaeghe.

Rutledge admitted it was his first time at a lectern, where he delivered his first piece, and wasn't quite sure which stance to adopt. But it didn't matter as his delivery was well received by the audience, generating laughter in some parts. This prompted Rutledge to respond, "Now I get it. I was wrong the whole time."

Rutledge's then took up his guitar and gave a spirited rendition of a song inspired by the text of Booker Prize-winning author Michael Ondaatje.

Other selections on the program included excerpts from Remembrances of Things Past by Marcel Proust, as well as a violin sonata by Cesar Franck, aptly performed by Mayumi Seiler (pictured right).

One of the biggest challenges for a show like this is to maintain steady pacing of the show, which I found lagged a bit much between sets as the stage was reconfigured for the next act. 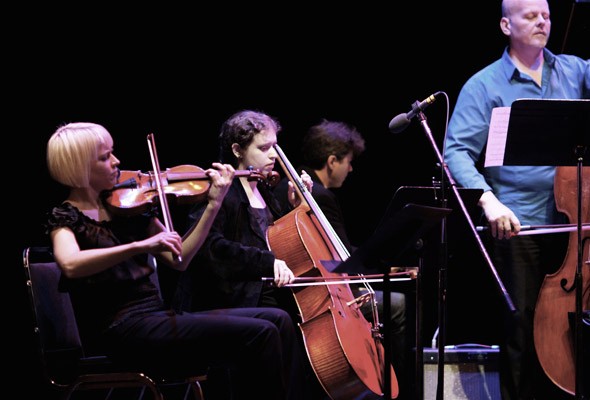 I could've done without hearing Allen Ginsberg's entire Howl piece again, although the re-worked instrumentation by pianist/arranger Jonathan Goldsmith made for an interesting comparison.

Watching bassist George Koller totally immersed in creating not just the rhythm section but most of the percussion as well was a sight to behold. Koller threaded a drumstick between two strings and gave it a good whack a few times, sending reverberations around the stage. The addition of piano, trumpet and violin added to the beautiful cacophony at times, which almost drowned out the endless rant, aptly interpreted and read by Dykstra.

Tonight at 8 p.m. is the last performance in this two-night run of Words and Music at Harbourfront Centre's Enwave Theatre (231 Queen's Quay W.) Remaining tickets are $39 (students/seniors $25). For tickets, contact the Harbourfront Centre box office at 416-973-4000.