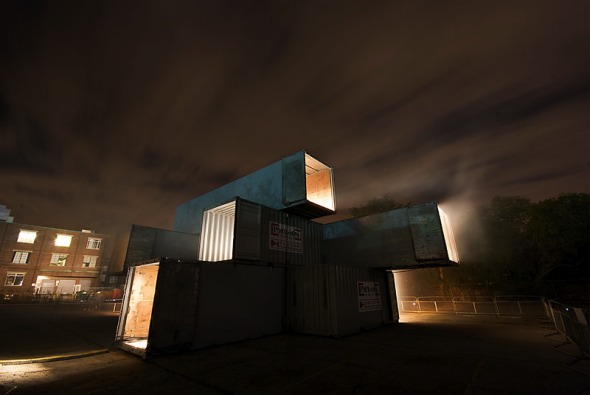 Aside from the crowds, which made it a little slow to get from A to B, I was immensely pleased with Nuit Blanche '08. As promised, organizers put the focus on large exhibits where hundreds of people could partake in the spectacle at once. Highlighted in my video are the most visual bang-for-your-buck exhibits I saw... however I missed plenty, like the above Future Perfect, plus I didn't touch Zone B so please feel free to link to your videos in the comments below.

Some exhibits needed to be seen and others heard, making it a rewarding night for anyone who braved the cold to trek around the city. 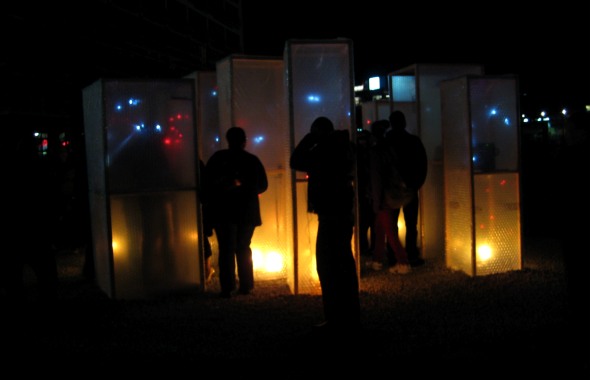 I took the above photo at what I thought was Original Soundtrack, but now I'm not so sure. This audio was too low to record, but the cubes emitted screams, shouts and comments from the audience inside creating a very disturbing auditory barrage. 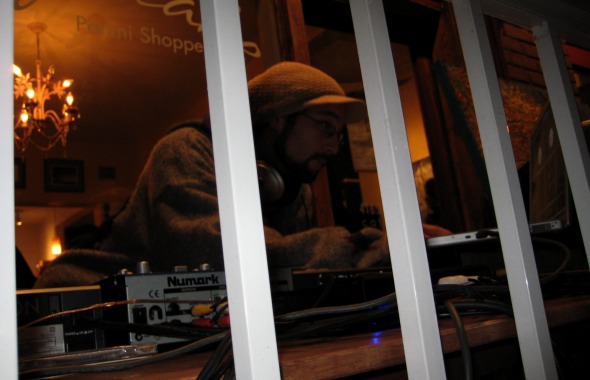 Even with all my previewing and planning, I still had the chance to discover weird unexpected art - including some fantastic music. I caught this DJ on McCaul before the street became nearly impassable, spinning great low key beats for the crowd. There were also a few wicked parties celebrating the all night art affair, such as the LABOOM rave at the ROM and the OPOPERON party across from the Drake... although they were shut down earlier than planned, it was not for want of party goers!

Overall, despite the need to shut down traffic for pedestrians, I thought this year's Nuit Blanche was a great success (as long as you avoided the club district, that is). In general, it was a phenomenal improvement over last year, and I only regret not having more time to see everything I missed. Next year, I hope they continue to create large crowd-involving exhibits - out of the galleries and into the streets!

Photos: Future Perfect by arcticlamb and all others and video by corecorina