This week we're following a handful of Torontonians as they navigate the bilingual lotus land of Pop Montreal.

A hundred pairs of red and blue eyes were aimed at the stage. A band was playing, a smoke machine was coughing and a gang of terrifying, woodland puppets towered over the crowd.

It all went down at 'Le Saints' bar for the closing weekend of Pop Montreal.

The show began with a narrator spinning a tale of young French Canadians lost in a haunted forest. Sweet Mother Logic, a local instrumental group, began to play and the titular giant puppets emerged.

The ghost story and the 'papier mache' monsters were the handiwork of Bekky O'Neil, Concordia student and native Torontonian. She traversed the crowd herself with homemade stilts and giant caribou antlers.

Bekky's energy, style and bold green eyes may strike you as familiar. They are traits she shares with her mother, broadcast legend and fashion television host Jeanne Beker.

I caught up with the 21 year-old for a couple questions after the show.

blogTO: How did you first get interested in puppetry?

Bekky: I grew up with my Mom giving me puppet shows every night before I went to bed. She always had an interest in puppetry but she never really pursued it.

This past summer I went to Bread and Puppet Theatre for six weeks on an internship; I came to the conclusion that people will listen to puppets say things they can't hear other people say. They are a fascinating medium.

blogTO: How did puppets get involved in POP Montreal?

Bekky: A couple of months ago my friend Eric from 'Sweet Mother Logic' messaged me; he said his band got a slot in the 'Pop Matters' line-up and he wanted my help. I suggested I make puppets for the show; that's what he had in mind as well.

blogTO: You and so many native Torontonians are currently studying in Montreal. Do you have any plans of coming back?

Bekky: I love Toronto; it's a beautiful and fantastic city. I do always warn people you have to know someone there before you visit though. If you don't you'll end up bored, shackled to a C.N. tower elevator or a hippo bus. I think Toronto has a great arts community and theatre scene if you're tapped into it, and I do want to come home eventually.

blogTO : Do you think it's a blessing or a curse to be the daughter of a Canadian icon?

Bekky: I would say, as I light another cigarette off my first one, that it is both. I offended her on some level a few years ago when I told her I didn't want her to help me; that I wanted to pave my own way. That being said when she was my age she wanted to be a puppeteer too so there's a level of understanding and respect. Ultimately I think I would like to collaborate with her in one way or another.

blogTO: Who's your favourite celebrity puppet?

Bekky: I'm going to have to go the expected route and say George Bush has done a beautiful job at that. Those sticky-outy ears, that lone-star charm, operating on other people's policies...I think he's doing a great job. 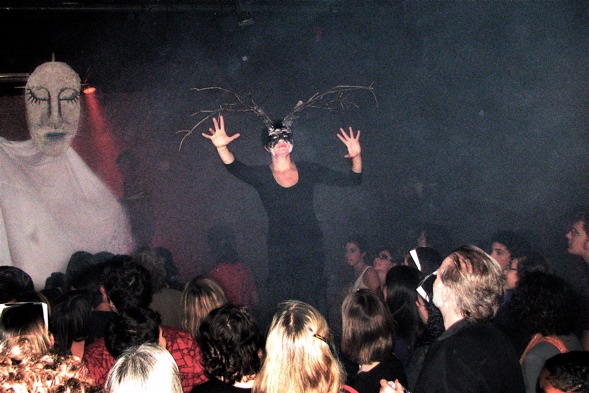 Tabernac! Tabernac...I think it means altar. Is altar a swear word now? Only in Quebec...