A Night at the Opera, Seduced by Don Giovanni

I've been to a number of musical theatre performances in Toronto, but this week was my first time at the Four Seasons Centre for the Performing Arts to attend a Canadian Opera Company performance.

Don Giovanni set to the music of Mozart would have normally been a bit rich for my wallet, but with the new $20 tickets for those of us under 30, I was able to take in an absolutely breathtaking performance of world class opera right here at home. 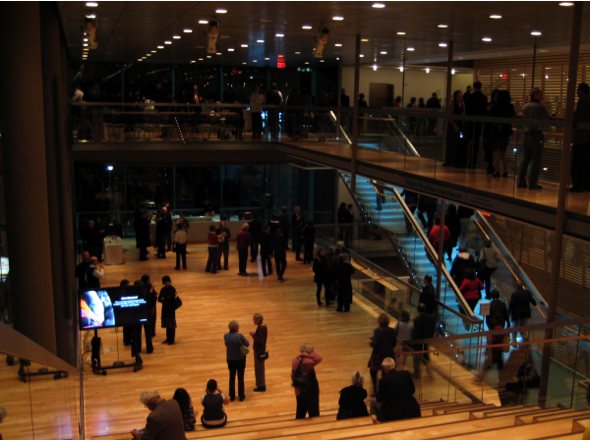 Nevermind the performance, the entire 'night at the opera' experience is absolutely awesome at the Four Seasons; you can tell from the boutique window exterior that the inside is going to be amazing, but it's difficult to appreciate it until you're in the space. 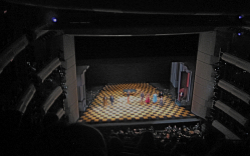 They're only really camera-friendly outside the performance theatre, but of course I snuck a few (admittedly terrible) shots. The five levels of the inner theatre are wonderfully spaced atop one another, so that even in the very back row of the uppermost ring I had a fantastic view for Don Giovanni.

Surrounded by such fancy-pants finery, I was a little unsure of who to expect to see in attendance, but in this case the opera appealed to all walks and ages. Don Giovanni, the man who believes "fidelity to one woman is cruelty to all others", is a classic lust story that pretty much anyone can follow.

Although the opera is sung in Italian, there are English surtitles (like little summary sentences to help you follow the action without completely distracting you from the stage) provided as needed. Being familiar with the story and well-versed in the language of love, I barely needed the surtitles; but they helped me to get some of the zingers the cast were tossing around in Italian.

The passionate love story is both sarcastic and humorous, tender and violent, but inevitably ends up in a melodramatic fate for Don Giovanni. The stage helps to transition through the (admittedly) long performance, with beautifully designed component set pieces that transform and interact in various ways to create different shapes and shadows.

The cast (of course) is also top notch... especially COC Ensemble Studio soprano Virginia Hatfield as Zerlina, and Robert Pomakov in the hilarious lead as Leporello. I feel like Julie Makerov as Donna Elvira, the poor woman who gets completely shafted (heh) by Don Giovanni, deserves a shout out too.

Overall the experience was breathtaking, but I'll have to attend a few more operas before I'm hardened enough to handle the intensity of the performance. Luckly, the Canadian Opera Company's Opera for a New Age tickets will be available for future performances as well; one of the best $20 I've ever spent in Toronto.