Starting today you might have notice that Queen Street West sidewalks got a little busier thanks in part to Dance Like No One Is Watching, a special presentation as part of Toronto's Summerworks Festival.

I strolled by today to take a look. The event was described as pockets of dancers performing "amidst street traffic connected by a shared soundtrack heard only through their individual headsets." I was most intrigued by their shirts that read, "F**k off, I'm dancing like no one is watching," and I didn't want them to wear the shirts without the irony that someone is in fact watching.

I'm no dance critic but I found I actually have something to say about the piece. 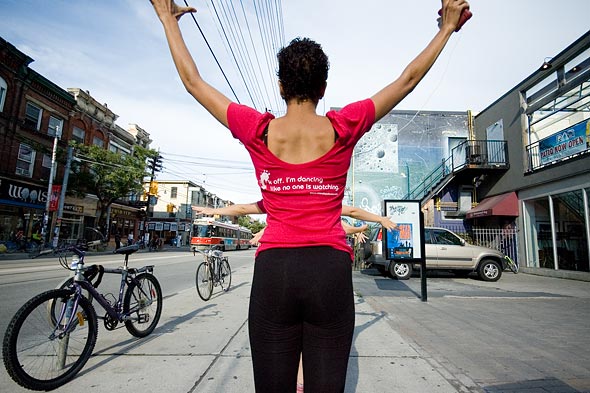 The performance was three groups of four women in different set locations along Queen Street West dancing in bright tops and spandex while partially blocking the sidewalk. Every once in a while each group would form a line and do a little choreography, but generally it was each performer interpreting the synched music on their own.

While the piece was designed so that the dancers are "unaware of their unconventional urban location," I thought it would be so much stronger if the performers were in fact participating with their environment in regular clothes, walking the sidewalk with everyone else, crossing the street where other people cross, even go into stores, all while dancing to the synched music as if no one was watching. Just imagine walking down Queen West and passing a dozen different people all really grooving out to their headphones unencumbered by passerby's looks, then imagine seeing two of these people (or more) suddenly interacting and dancing to what is obviously the same music. That would be something to see. 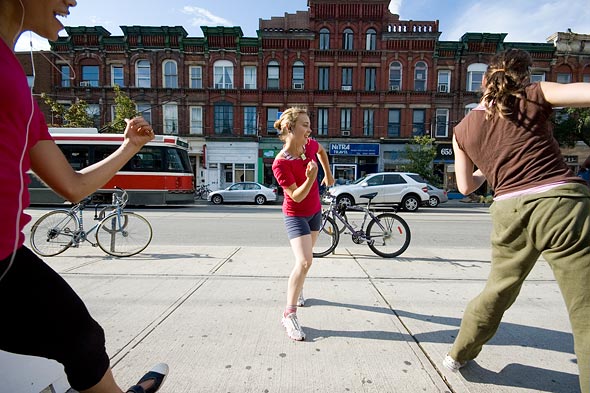 Dance Like No One Is Watching is presented by Stand Up Dance. Dancers will be on on Queen Street West every day somewhere between the Cameron House and Gladstone Hotel through August 17th. Each performance is 30 minutes in length. 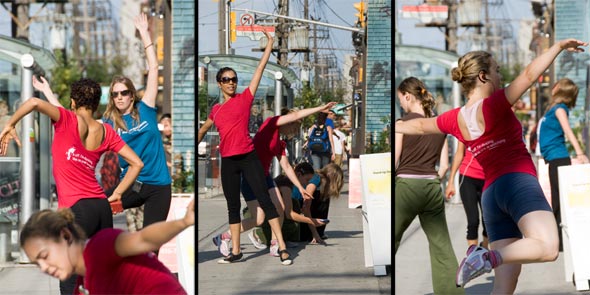