All Summer, All Free: Not Quite How I Remember It

The Power Plant at Harbourfront Centre has opened its doors to the public All Summer, All Free. This year's major group exhibit, Not Quite How I Remember It is a cohesive collection of visual and aural imagery from fourteen accomplished Canadian and international artists who rehash and sample history and iconic works previously done by other artists. Rather than looking at these as a wistful memory, the exhibiting artists reenact and fuse separate events, making one question the authenticity of the present. 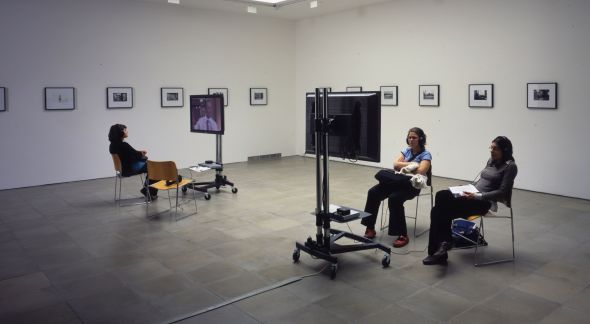 Launched on June 7, the exhibit runs until September 1st and is an interesting way to spend a free weekend afternoon at the Harbourfront. And when I say "afternoon", I mean almost a whole one: the volume of pieces requires more than a few minutes to digest, specifically video and performance-based pieces from Irish Gerard Byrne's 1984 and Beyond and Canada's Diane Borsato with Three Performances. This exhibit is not one to breeze through. I didn't realize I was in The Power Plant for two hours.

The former is a video split into three screens, wherein European actors play 1960s American science-fiction writers that talk about what the future will be like from 1984 to 2000. Based on an actual 1963 article that appeared in Playboy, their Utopian and Jetson-like predictions now seem even more absurd with Byrne's intentional overtly retro setting and awkward acting.

One of my top picks is Borsato's Three Performances, wherein she recreates Joseph Beuys' Coyote: I Like America and America Likes Me (1974), Marina Abramovic's Dragonheads (1990-1992) and Bonnie Sherk's Public Lunch (1971). Instead of using the exotic, wild animals in the original pieces (coyotes, snakes and tigers respectively), Borsato's co-star is her pet cat. Her relationship with the cat brings about unpredictability that surprisingly works in the context of the environment she has laid out for her feline friend.

Another highlight is Swedish Felix Gmelin's Tools and Grammar. A rediscovered 1926 film on blind children in Germany, "Bei den Blinden" shows how blind children interpreted a graveyard through clay. The photographs of these moulded pieces, combined with haunting voices speaking in several languages heightens the feeling of disconnect.

A common theme in several collections is political and social protest, as seen in Mary Kelly's Flashing Nipple Remix #1 (first picture above), multimedia artist Kelley Walker's Black Star Press and Sharon Hayes' In The Near Future. 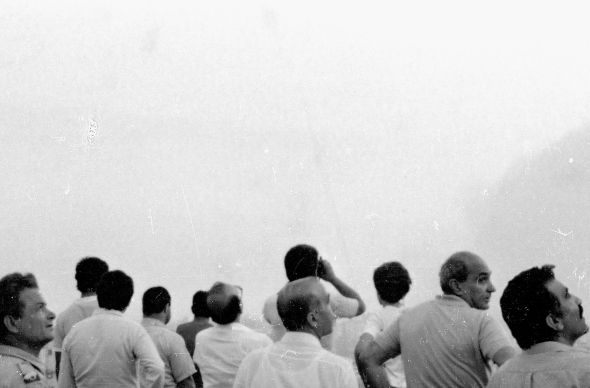 Lebanese-American Walid Raad's prominent Untitled (1982-2007) is perhaps the most accurate reality one can see in the exhibit. These faded photographs taken in 1982, forgotten, and developed in the last year, are memories; yet they somehow feel interchangeable with the region's not-so-distant unrest.

Not Quite How I Remember It
Now until September 1, 2008
Free Admission
For more gallery schedules and special events, such as Lee Walton's LIVE on Monday, Sept. 1 see The Power Plant website
All photos c/o The Power Plant