The bleak Bloor underpass just west of Lansdowne is sporting a whole new look, thanks to Toronto artist Richard Mongiat. The Underpass Project is sponsored by the City of Toronto's Clean & Beautiful committee, but Mongiat's 400-foot minimalist mural is very different from the super-bright "cover-ups" I'm used to seeing in city murals. 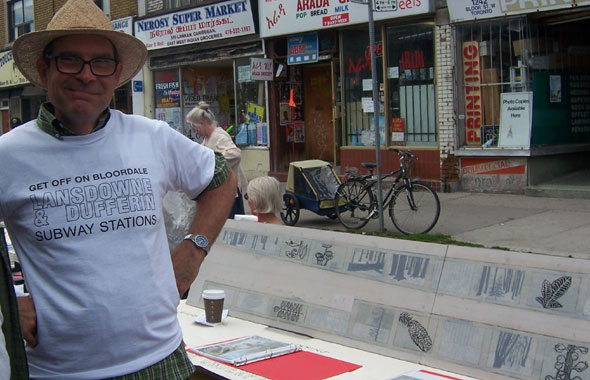 I talked with Mongiat at Saturday's first annual BIG festival. He says he originally conceived the concept for the Dupont underpass, but he was convinced by local artist & activist Dyan Marie of DIG IN to create the mural to coincide with BIG. The change in location meant that Mongiat had to rethink his original idea, but he was obviously pleased that he'd finished the mural in time (he was still working on the last touches on Thursday).

"These frames," he says, pointing to the raised rectangles within the wall, "set up the design elements." Mongiat found his inspiration in the barren trunks of winter trees. "Like this neighbourhood," he says, "dormant but coming to life." 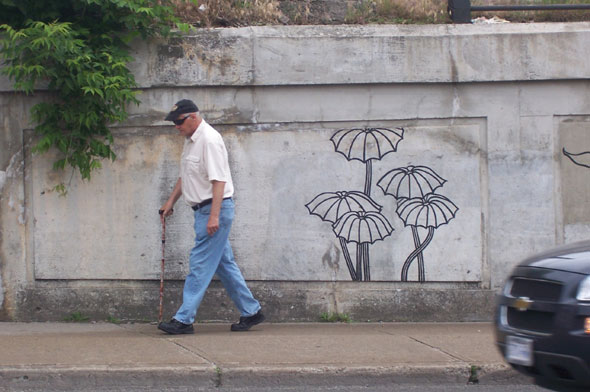 There are four visual elements at play here: three from Mongiat--grey tree trunks, white wallpaper-inspired sworls, and close-ups of spring buds--and a fourth, surprisingly active element--the worn concrete of the underpass itself. "By keeping my work muted, black, white, grey, the wall really came through," says Mongiat with pride. "Now, the weather, the rain stains become part of the design. The wall comes alive."