Luminato: Telus' Light on Your Feet

Luminato will be hosting Telus' Light on Your Feet at Yonge-Dundas Square until June 11th. With my two left feet, I figured it was important to pick up some new dance moves. Festival-goers will be able to dance with professional dance instructors and try out their new steps to the sounds of some of North America's best dance bands.

My Friday night adventure started off at 6PM at Yonge Street - before the bustling crowds arrived and billowed in the humid June air. At the L'Oreal tent, people were lined up to get free hair and makeup makeovers, performed by a team of expert stylists who had previous attended L'Oreal Fashion Week.

They whisked their hands through people's hair and brushed powdery velvet on people's faces as though they'd practiced these skills and known these strangers for years. While I'm not fond of putting on makeup, I prided myself in being the only guy around who was brave enough to get my hair done. 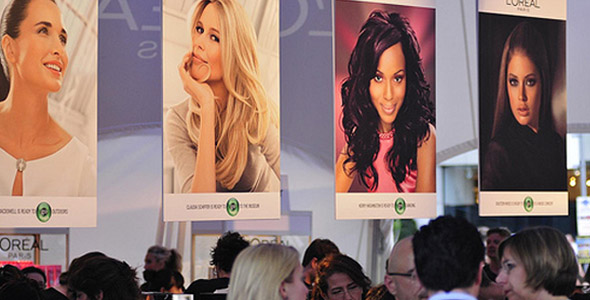 There were a variety of yummy fashion stylists that worked at breakneck speed. Within a few minutes, they turned my dull haircut (which was long past its expiry date) into beastly, spiked mountains that could jab someone's eyes out if I wasn't careful.

Within the L'Oreal tent, there are five different looks to choose from for hair and makeup. However, the stylists are willing to do whatever it took to get you ready for your night on the town. A word of caution: the line-up for hair or makeup was about twenty minutes long, so budget your time wisely.

After looking prim and proper, we moved closer to the stage where the East Coast New World Orchestra began to flood the square with a symphony of sound. Using a variety of instruments, with a Nova Scotia flare, their medley of music seemed to be the perfect way to spend time on a Friday evening.

At 8PM, the feature event, Telus' Light on Your Feet, brought thousands of people to Yonge-Dundas Square. Two snazzy-dressed dance teachers appeared from the crowd ready and enthusiastic to teach a packed audience as we began swinging our hips to a lindy hop dance lesson under a canopy of luminescent orbs. The 2nd annual Luminato Festival was under way.

The lindy hop a staple of swing dancing was not only upbeat, but also relatively easy for even the most rhythmically-challenged of us. With only two instructors teaching over a thousand people it was important (if you really wanted to learn) to get up close and pay attention to the instructors. 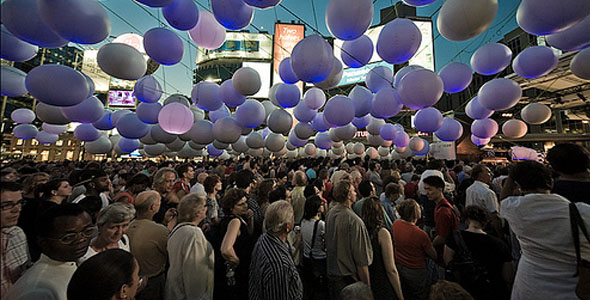 As the night progressed, people began to spread out and strut their newly-learned dance moves under the city lights. The show ended with a headlining performance by the world-renowned Count Basie Orchestra, featuring Montreal signing sensation and 14-year-old prodigal talent Nikki Yanofsky.

If you missed the first day, don't fret. Light on Your Feet continues throughout the week and will feature other dance styles such as tango, disco and bollywood. For more information about this and other Luminato-related activities, be sure to check our Luminato Visual Arts Round-Up.

Photos by reflex6002, James@mannequindisplay.com, and wvs.