Evil Dead: The Musical Fans Line Up for 300th Show

Evil Dead: The Musical is celebrating its 300th show in Toronto and fans lined up this morning in front of The Diesel Playhouse to grab the first 300 tickets, sold for just $3 (or 300 cents) each.

Some of those who lined up this morning, like Jim Taggart, 16, weren't even out of diapers when that last film came out. Taggart is one of Evil Dead's favourite fans, having seen the original movie 20 times and the musical seven times.

"They capture the humour perfectly," says Taggart, who lined up with his mother Carol Ann (pictured above) early this morning to get tickets. "They nail the one-liners, the blood and the slapstick from the movies."

Taggart and his mom Carol Ann have seen the musical together five times. "I don't know if he's like other teenagers, but repetition is part of the process," she says as her son proudly shows me his homemade chainsaw, signed by the entire cast.

Over 150 people lined up for the specially priced tickets to the show, which is on Thursday, June 26 at 9 p.m. "It's going to be a big party," says Matt Birnbaum, manager of Diesel Playhouse. "There will be prizes for best (Evil Dead character) costume, as well as other prizes and giveaways and an after party with live music. It's our 300th show, so we might as well celebrate with our fans." 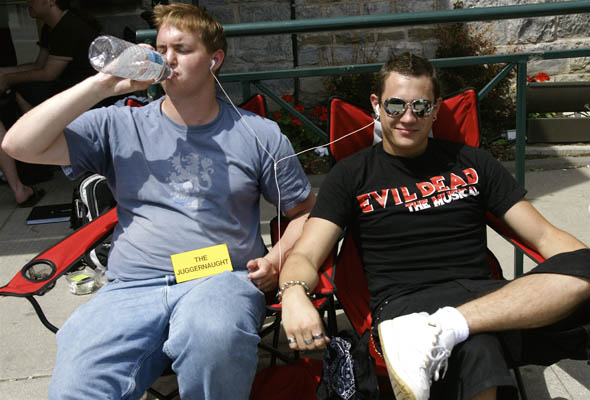 Chris Chew, 22, and his friend Kyle "The Juggernaut" Allan, 22, pulled an all-nighter. "We're running on enthusiasm and caffeine," says Chew, who says it's the greatest musical he's ever seen. 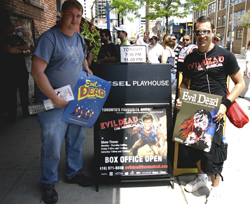 "The songs are really catchy. And there's blood, guns, chainsaws and zombies. Everything is better with zombies."

Seven hours later, their long wait is rewarded with a pair of $3 tickets and posters to Evil Dead: The Musical.

Ottawa resident Adam Hines, 22 (below right) was first in line this morning, along with his friend Jonathan Coit, 22 (below centre) from Niagara. The two Sheridan College animation students left Oakville at 5:30 this morning to ensure they'd get tickets.

"I love sitting in the splatter zone," says Coit, referring to the front rows where audience members are likely to get splattered by fake blood during the show.

For the 300th show, there will be regular and "Splatter Zone" seating available on a first-come, first-served basis for ticket holders, so expect another line-up that night if you want to be up front.

"Only us delinquents sit in the front row," says Hines. "This will be my third time seeing the show. The second time I lined up to see a performance where Bruce Campbell, who played Ash in the movies, did a Q&A afterwards. "He threw fake blood on my face," enthuses Hines. "It was fantastic!" 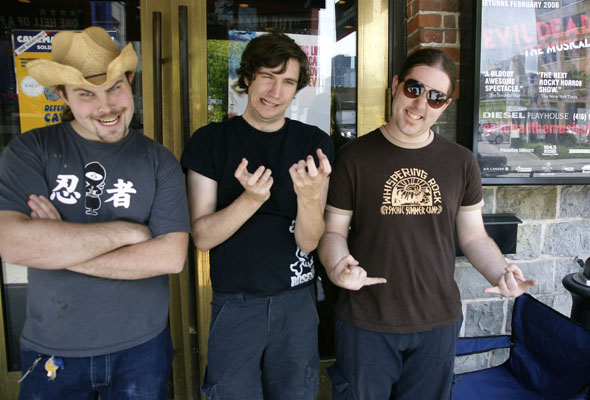 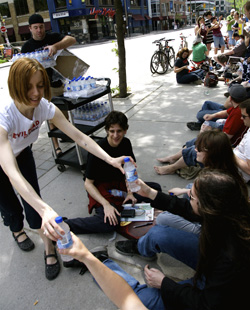 By 12 noon the temperature peaks above 31 degrees and the midday sun is starting to take a toll on the crowd. Staff from the Diesel Playhouse greet the crowd wheeling a cart full of cold, bottled water and help keep the crowd happy and hydrated.

"That was really classy of them," says contractor and actor James Collins, 26 (above left) who was number three in line.

About an hour later Christopher Bond, 31, Director and Co-creator of the show comes out to greet fans and give away posters, keeping their spirits high. Karen Chan and Cait Power (below) are among the recipients.

Chan has seen the musical eight times already. "I was going to go to the very first show but it happened on the night of the Toronto blackout, so I couldn't make it" says Chan.

"Although I heard that the show went on anyways." With dedication like that, the show must go on much longer.

Further along in the line is Kathy and John Raepple, who drove an hour from Brantford, Ont. at 10:15 this morning to line up for tickets. The couple has seen the show 26 times already, including four times in New York, where original Toronto cast member Ryan Ward played the lead. "My favourite song from the show is Do The Necronomicon," says Kathy. "It's a big dance number." 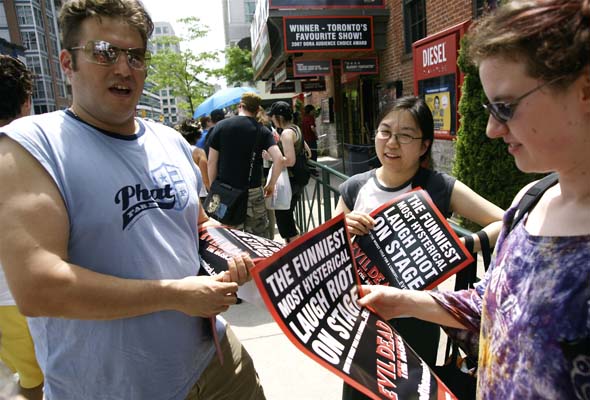 With the rise in popularity of zombie walks and Thriller dances it's no wonder that a show like this is successful in Toronto. The show has gone on to succeed in as far off places as Korea.

When asked what makes Evil Dead: The Musical so successful, Bond says "It's a party. It's not snobby theatre." Sounds like a reasonable explanation to me. "How many shows do you get bled on?" he adds. Good point. 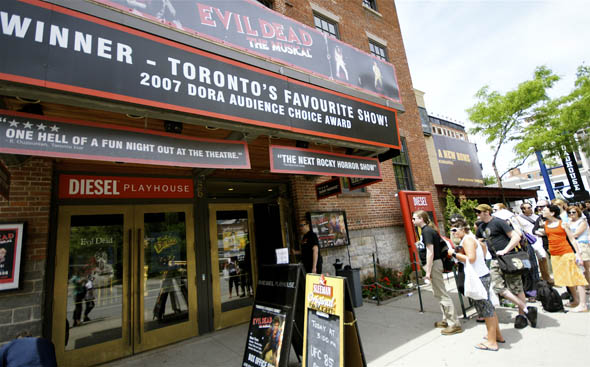