Evil Dead: The Musical last Thursday proved the show has legs. And fangs. And lots of blood left. After 300 shows and 140 gallons of fake blood, the Toronto production is still going strong, building a loyal cult following.

The production, based on the Evil Dead film series, celebrated its 300th show in Toronto at The Diesel Playhouse Thursday night. There were prizes awarded for the best Evil Dead character costume, a bustling after-party and likely the rowdiest fans the show has seen since Bruce (Don't Call Me Ash) Campbell's attendance at the show.

The show just finished a successful run in Seoul, Korea and is playing in California, with plans for Berlin later this year. It has seen about 600 performances worldwide and is now the longest-running musical ever written by a Canadian. 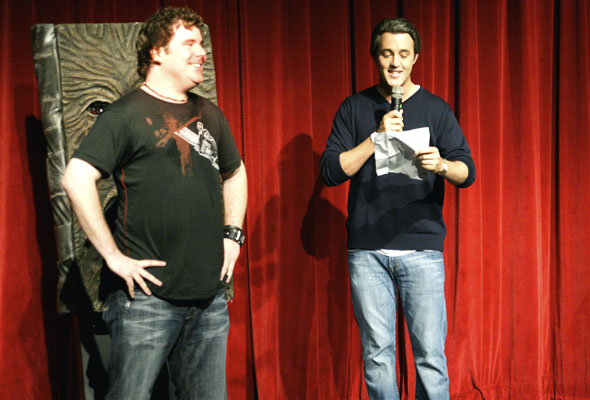 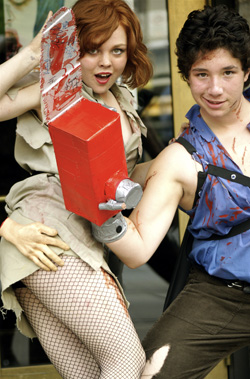 Ben Mulroney was on hand to help introduce the 300th show.

I recognize a few of the die-hard fans from the lineup for the tickets to this show and many of them are dressed up for the occasion.

Among them is Jim Taggart, 16, and his friend Kaity Campbell, 15 (pictured right) complete with bloodied chainsaw and severed hand. They were waiting in line since 8 a.m. again, rearing and ready to revel in "the splatter zone" seating right in front of the stage.

Campbell says she loves the songs in the production and has them memorized. Note to producers: if you need a new understudy for any of the female parts, she's got the voice for it and sung me a line before the show to prove it.

Chris Chew, 22, and his friend Kyle "The Juggernaut" Allan, 22 are back with a vengeance. Allan (pictured below with chainsaw) picks up best male costume prize, while Campbell is ecstatic to win the best female prize.

The show itself has improved tremendously since its humble beginnings in the back room of the Tranzac Club in The Annex. The sound is much improved and the lighting is spot-on. The stage design too has seen a lot of work and all helps contribute to a super slick production. 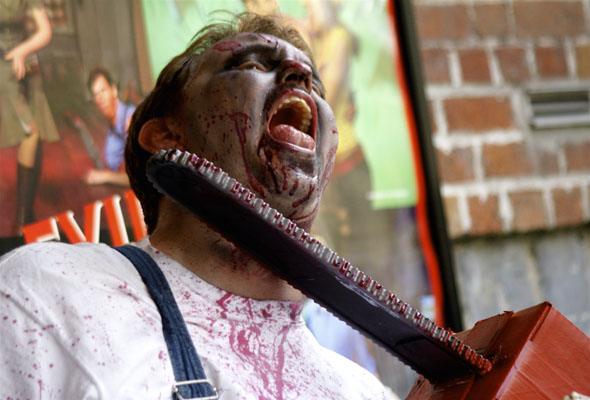 Paget Ross, 20 (pictured below on right) and her friend Leanne Mladen, 37 are all bloodied-up to see the show again. This is Ross' second time and Mladen's fifth time seeing Evil Dead: The Musical. 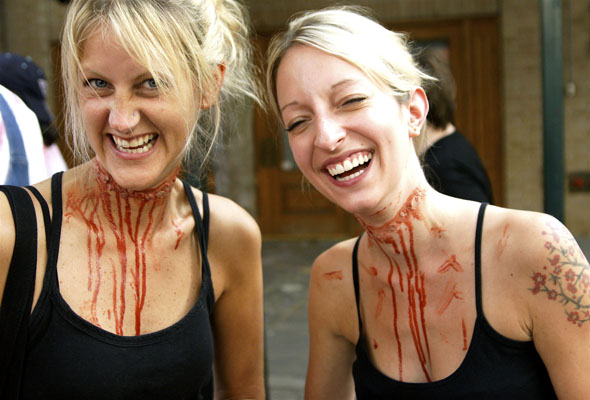 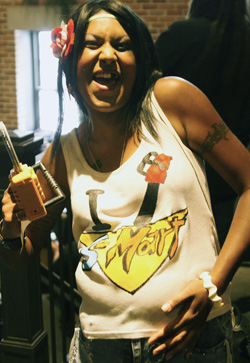 One of the most ardent fans sits next to me for this performance. She introduces herself as Darla from the trailer park in Hamilton (pictured right).

With her toy chainsaw and S-Mart tank top, she proves to me that Evil Dead: The Musical appeals to a diverse audience indeed.

The cast is led by Ryan Ward (who plays Ash) who was in the original Toronto production, as well as the Broadway show. Ward is joined by Trevor Marin (Ed), Andrea Brown (understudy for Linda, Cheryl and Fake Shemp) and Mike "Nug" Nahrgang (pictured below) who all were a part of the Montreal Just For Laughs Festival production.

During intermission I get a chance to check out the merchandise booth and quench my blood thirst at the bar.

A sign at the merch table teases "69 ways to have fun with an Evil Dead beaver." 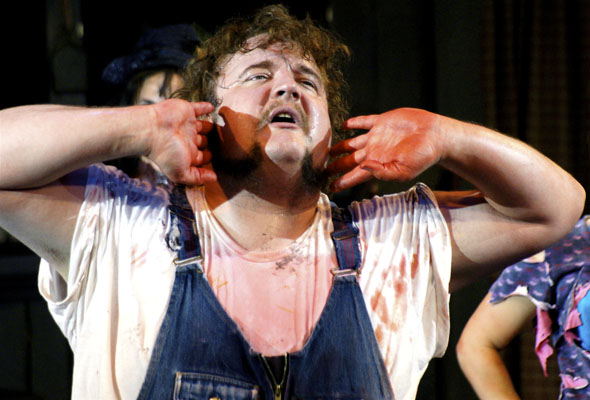 After the show, a blood-splattered live band, Toronto's own Run With The Kittens plays in the foyer for lingering fans to chat and compare splatter-zone stories.

The venue is ideal for seeing a show like this. Instead of sitting elbow-to-elbow with other theatregoers, the set up is more like a traditional dinner theatre. Bar stools and small groupings of tables seat up to four. There's a munchies menu with a fully-licensed bar, so you can swig your beer while they splatter their blood on stage.