Starting today, Toronto becomes every photoenthusiast's mecca with CONTACT running across the city all month. Tonight in Parkdale Gallery 1313, Shopgirls and The Gladstone are opening their doors to the public with their respective CONTACT exhibitions, and right smack in the middle is Queen West's newest addition to the art crawl, GalleryDK.

GalleryDK is the brainchild of the DK Photo Group, an established Toronto-based collective made up of Russell Brohier, Sean Galbraith, Laurin Jeffrey, Steve Jacobs and Mat Merrett, known for their haunting imagery of abandoned urban sites. I met Sean at the gallery while he was hanging his pieces for tonight's Anamnesis launch. 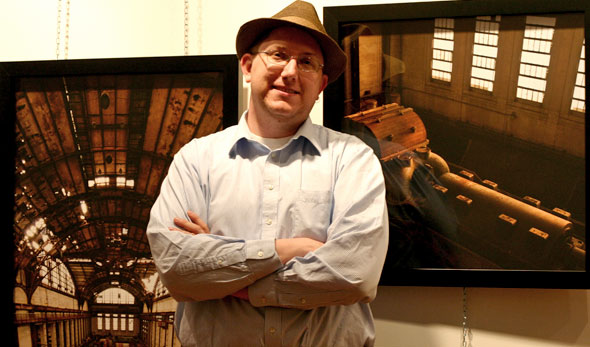 Why Anamnesis?
Well, anamnesis means "the recollection or remembrance of the past", which ties into CONTACT's theme this year which is "between memory and history".

For the uninitiated, how did the DK Photo Group come about?
We came together as a group back in 2005. The five of us do abandoned building photography - it could be anything from industrial sites like power stations to assylums and orphanages to theatres. This is our third CONTACT show and fourth exhibition as a collective.

How long has GalleryDK been open?
The grand opening is on May 1st with Anamnesis, but we have had an exhibit here in April called Mosaic, which featured photographic works from Parkdale Collegiate Institute and West Toronto Collegiate Institute. That show started the day after the gallery's construction finished (April 9).

This space was actually a burned-out storefront, it was the kind of place we'd normally take pictures of. One of our members, Laurin, is a real estate agent and his boss is the landlord. When we started this was missing a ceiling, so we completely restored it, put in new floors, walls, wiring, basically we brought it back from the dead.

After Anamnesis, what's next for GalleryDK?
We're currently working on the exhibition lineups for the summer, we're actually holding an open call for submissions right now on urban environmentalism. We want GalleryDK to focus on lens-based media, that includes photography, photo-based imagery and on occassion, video. We also want to keep the urban theme to the works shown in our gallery.

GalleryDK's grand opening is tonight from 6:00 to 10:00 pm, located at 1332 Queen Street West. For more information on regular hours visit the GalleryDK website.