Anime North 2008 was hosted from May 23rd to May 25th at the Toronto Congress Center, and is revered as one of the two must-see events of the year. For those who haven't caught the craze sweeping the nation, here's an account of a first-timer's experience at the convention.

Although anime and manga have been around since the 50's (think Astroboy), they've remained trendy amongst today's youth and there is a clear distinction between the two. Anime refers to Japanese animation (such as popular movies Spirited Away and Howl's Moving Castle), while manga refers to Japanese comics (like Doraemon and Inu-Yasha). Like literature, anime and manga span a wide variety of genres from action-and-adventure to horror.

Being an avid fan of both, I decided to make my way to Toronto Congress Center to see what the commotion was all about. In previous years, I've attended Fan Expo hosted at the Metro Toronto Convention Center, which prides itself on being a convention for everyone. Anime North, on the other hand, is a convention targeted toward the anime and manga otaku in all of us. 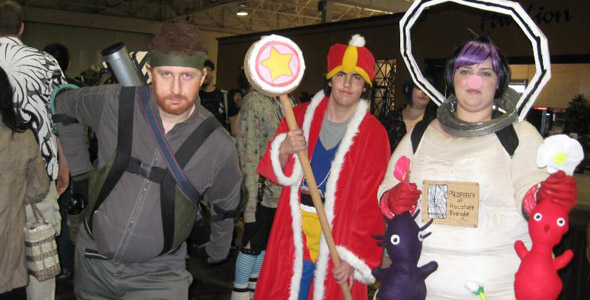 Bustling lines were everywhere at North, which wasn't a surprise considering that there were over 14,000 people in attendance this year. It has grown a lot since it began in 1997, when roughly 800 packed The Michener Institute.

The pre-registration line wasn't much shorter than the registration line, which seemed to curve around the building, but after a short 25-minute wait, I got a nifty HMV bag with a bunch of goodies and my identification, then it was off to the dealers' room.

While most people were willing to shell out loads of cash for the items in their long manga wish lists, I decided to try to scope out some of the better deals. Conventions, in general, sell their manga cheaper (at American cover price), which ranges between $8-12 on average. On the other hand, anime may cost upwards from $10-30 for a single DVD, to as much as $80-150 dollars for an entire series.

The name of the day was deals - and there were lots of them. Buy-four-get-one-free deals, and 20% off US cover prices could be found. While a majority of the vendors were selling solely manga and anime, The Beguiling stood out as they were selling Toronto-based books such as Lost at Sea by Bryan Lee O'Malley and aspiring talent such as Fool's Gold by Amy Reeder Hadley. I happily scrounged up 7 volumes of manga for $60 and 2 DVDs for $20.

North is also known for Nominoichi, a big flea market where people sell an assortment of items at bargain prices (you can haggle too). As an Anime North virgin, I decided to stick with my group of friends, which is generally a good idea while attending a convention or you'll end up spending time looking for them instead of enjoying the convention. 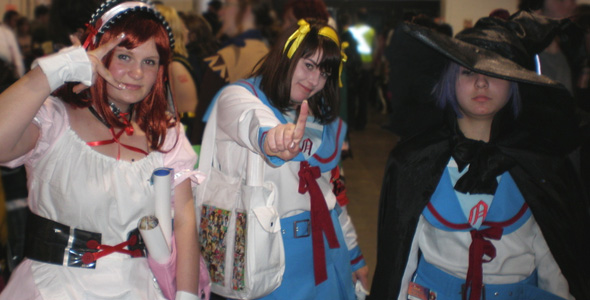 After leaving the dealers' room, I wandered through the aisles of artists' alley taking in some of the magnificent works of art from posters, buttons, to dolls and hats.

Tthere were a large number of cosplayers at the convention in comparison to Fan Expo, a surprise knowing (through first-hand experience) how much time it takes to produce a well made, hand-crafted costume. I could see the time and effort some people chose to put into their costumes, while others, opted for outfitting themselves in a cardboard box, labelled "Gundam". 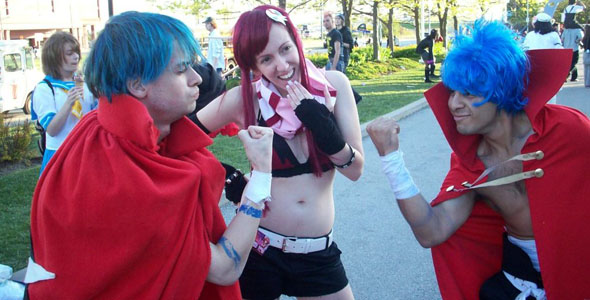 But regardless of effort, anyone who cosplays, from Gothic Lolita fashion to full-on, deserves a round of applause. Although I wish I could have finished my D-Gray Man cosplay in time for North, I will be dressed up for Fan Expo. Note to self, buy white bias tape.

By the end of the day on Friday, when I was carrying enough food and drink to feed an army, the squeals of fangirls and the smacks of yaoi paddles seemed like white noise.

On Saturday, Halko Momoi, popular anime voice actress known as the Queen of Akihabara, performed an amazing concert at the Plaza Ballroom. Furthermore, there was an assortment of events to participate in from The Moonlight Ball, a semi-formal escapade to Cafe De*lish, an exclusive maid cafe.

If you missed Anime North, don't fret. The next big convention will be Fan Expo and I hope to see you there.