Vancouver hates Toronto. According to a popular documentary last year, they hate us even more than Montreal. So why does Norman Yeung, one of their favourite sons, enjoy living here so much? 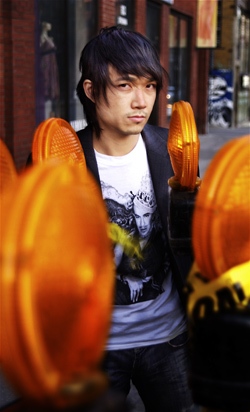 "We care about artists in this city, we support them. We buy their work, go to their shows. Vancouver has a lower population, the art crowd is devout but small." Born in China but raised on the west coast, Mr. Yeung moved here five years ago. He is a multi-disciplinary artist working in film, theatre, and visual art.

One of the key reasons he made the move was to develop his film career, to get into writing and directing short films. Recently he worked as an actor and a Second Unit Director on Bruce McDonald's The Tracy Fragments, an Ellen Page vehicle that opens in New York City on May 9th.

His one act show Jasmine, the second half of a full-length play he's presenting at Factory this June called Pu-Erh, was a critical favourite at Summerworks 2007. Many of the theatre junkies I talked to called it the best of the festival (personally I was two minutes late getting to the show and they wouldn't let me in.)

Norman's consummate urbanity, however, is most keenly expressed in his visual art. The city of Toronto hires him to make canvasses out of their electrical boxes; he spray paints and stencils them with elegant, often sexual, always memorable scenes of downtown life. Besides transit tunnels and alleyways, his work has been exhibited at galleries like the AGO.

Still, no matter how thoroughly he conquers Ontario, memories of Van City rise to the surface.

"One thing that's missing here is the sense of geography you get by walking around Vancouver. It's on a peninsula, there are mountains to the east, ocean to the west...you can feel the edges of the city. Toronto just feels like a street grid dropped on the side of a lake." He pauses, I ask him for something he likes better about T.O. "The architecture bums me out in Vancouver. There's no regard for heritage buildings like there is here."

Maybe it's worse in the City of Glass, but we still have a pretty terrible legacy on that front. My favourite building in Toronto stands at the southeast corner of Queen and Spadina, a handsome brick Edwardian with a baroque patina tower; a Lettieri at the bottom. The city used to be full of buildings like this, on the northwest corner there was a large, turreted brick building that housed a cinema. It was demolished; a low-slung McDonalds restaurant sits there now.

Still, with renovations of cultural centres like the ROM and the AGO, not to mention the creation of an opera house, I can recognize the upbeat, arts-centric Toronto that Norman talks about. We aren't half as willing to demolish historic and artistically important buildings as we were in the heady days of the 50's, 60's and 70's.

Norman Yeung can be found on Sunday mornings at the Stem Diner, nursing a hangover, eating breakfast with a beautiful woman. It's reassuring to me that as much as our city is maligned, we can still bring opportunity and community to the young artists who come here from across the country to follow their dreams. They even come from Vancouver.