Merging Art and Activism: 4Real Launch at the Supermarket

If you find yourself stuck at home in front of the boob tube on a Monday night, there's a more engaging alternative than watching has-beens battle it out on the dancefloor.

4Real, a television series conceptualized by Canadians and lifelong friends Sol Guy and Josh Thome premiered on MTV last Monday at 8pm, simultaneously throwing a party at the Supermarket in Kensington. The Supermarket was packed with a virtual who's who of Toronto's media and hip-hop scene.

No, this isn't another mindless MTV reality show but rather eight independently-produced documentaries featuring the plight of young leaders from around the world. And yes, there are celebrities too (Cameron Diaz, Joaquin Phoenix, M.I.A., K'Naan), but the publicity they've been generating for the project is more for social awareness than, say, when their next movie or album is dropping. 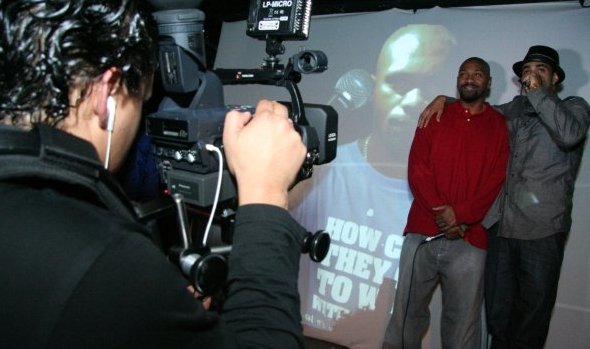 A "merging of art and activism", the show's creators come from backgrounds as diverse as the music industry (Guy) and the non-profit realm (Thome). As children they were both raised in BC's Kootenay Mountains by Vietnam veterans who were disillusioned by what was happening in the world that time and reconnected five years ago with an idea to bring advocacy work and environmental issues back into the consciousness of today's fleeting young minds.

How did the whole 4Real idea come about?
Guy: We started traveling for two years across Africa, South America and we connected with these young leaders like MV Bill, who under dire circumstances are doing major things for their community. Adding the celebrity element was easy. Josh worked with Joaquin Phoenix on a film before and we pitched it to him and immediately he got on board, went with us on a trip to Brazil to visit the Yawanawa community in the Amazon, signed on as Executive Producer and began connecting the dots from there.

We really wanted to bring the spotlight on these young leaders. The more I met these people from different countries, their circumstances might be varied but there's a similarity in the way they dealt with their problems and transcending their surroundings.

What do you want the 16-year old viewer to get from this show?
Guy: Find your passion. If you wanna do something it doesn't mean you have to give up your worldly possessions and go meditate in a cave. What are you passionate about? You don't have to fly to Africa to dig a well, change happens within you as a person, locally with your community. I am hoping that there is a shift in consciousness: money is not the only driving bottom line for business or your goals. There are other things just as important. As a society we have to start taking a good look at where we want to be in 20 years. If we don't get our act together we might not even be here.

Thome: We hope young people include social commitment and responsibility to their lifestyle. Back in the early 90s there was a huge environmental movement across Canada with the EYA (Environmental Youth Alliance). I don't know why it's not as strong now as back then but I think in Canada there's a resurgence happening. It won't be as rah-rah about the environment but more looking at how to implement practical solutions and how to bring economic engines into the system with social entrepreneurship. The non-profit world has its place but it's not gonna do it alone.

4Real airs Monday nights on MTV. Guy encourages people to log on to 4Real.com to connect with like-minded young leaders from around the world. 4Real event photos courtesy of William Nguyen.