I am a Banana Box

I don't like to complain after such a long cold winter, but it's hard to disagree it's a nasty wet weekend. Like most people, I've spent the weekend hiding indoors. OCAD Integrated Media thesis student Alexandra Hazisavvas, on the other hand, is spending 42 consecutive hours on a muddy baseball field moving from canvas house to canvas house 42 times.

"I am a Banana Box" is a large-scale performance installation piece set up in a in baseball diamond in Sorauren Park. 42 simple wooden frames covered in canvas have been erected and placed in a grid on the diamond to represent the 42 moves that Alexandra has made throughout her life. Beginning at midnight on Friday night, every hour on the hour Alex moves to a new "house" in the grid, taking her few items (a welcome mat, banana box and backpack) with her. 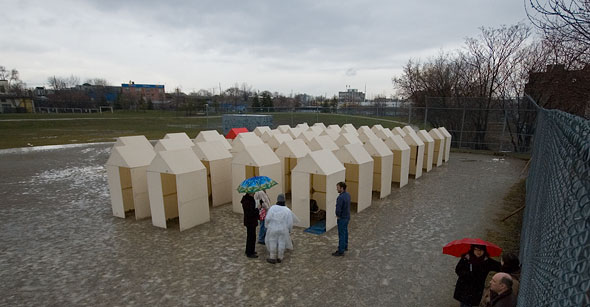 This isn't the kind of event I would have gone out of my way to see, but living less than a block away from the park, I couldn't resist. Installation art is a fascinating medium, something I so rarely see on nights other than Nuit Blanche. I don't know how many times I've moved, but I did this past month and so I'm still recovering from the exhausting experience of packing up and living in an entirely new area. The sheer number of houses on the baseball diamond, and watching Alex move just once, made me appreciate the exhaustion of an unsettled and moving life. She's half way over at this point, she will be at the park until 6PM on Sunday, so stop by and cheer her on. 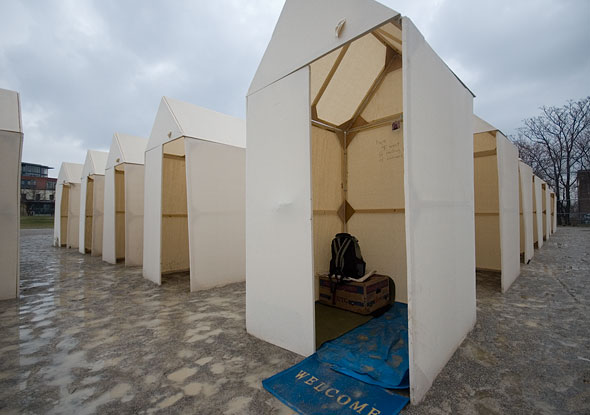