Don River: Throw Me A Lifesaver!

During yesterday's much-blogged about Earth Day I decided to take the 501 streetcar down to the Lower Don River and check out the latest project by No. 9. According to their website's mission statement, No. 9 believes that "contemporary art can stimulate positive social and environmental change". For this particular piece, executive director Andrew Davies (of NYC's MoMA and Evergreen @ The Brickworks' fame) commissioned Quebec artists BGL to install a 30-foot sunken cruise ship* on the water and a huge orange lifesaver with "Don River" painted on it.

I missed the Earth Day walking tour which happened in conjunction to the April 22 project launch so when I got there the only people in that area were a few cyclists and a homeless man shouting indecipherable words at me from under a bridge. I was expecting a "sunken ship"* like it says on the website but this is what I saw: 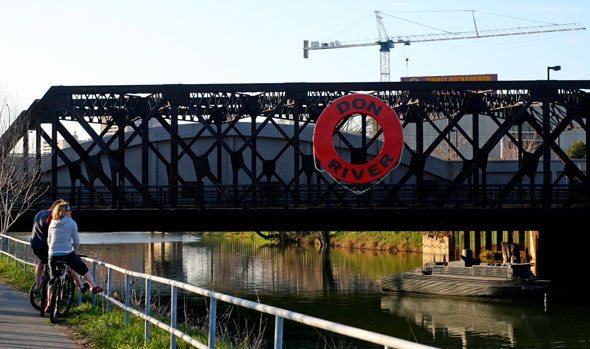 That doesn't look too sunken to me.

Out of the 20 minutes or so I spent standing there mulling about the piece, only a couple of people actually took time to look at it. Most of the cyclists would just glance while a group of kids showed more excitement with a potential beaver-sighting.

Did the project fall short of its promise to arouse reflection on the ecological issues plaguing our beloved Don River? Maybe, maybe not. It did get me to pause and ponder on the waterway's poor state in all its murky, smelly glory instead of just forging straight on the bike path. However if you were a mere passer-by with no knowledge of the artistic and environmental goals of the ship and the lifesaver, would you even stop and look?

The BGL: Project for the Don River runs from April 22 to June 29, 2008. Aside from yesterday's activities the artists will be discussing the project at the Art & Ecology Symposium on June 26, 6:00 to 8:30 pm at the Isabel Bader Theatre, 93 Charles St. West. For more information visit www.no9.ca.

*Edited: Thanks to Graham for pointing out that it said SHRUNKEN not sunken in the press release. I don't think it would have made any difference if the artists decided to sink the ship though.