City Hall Gets Some Colour, Care of GRL

Graffiti Research Lab is arguably the best thing to happen to City Hall, in all its concrete splendor, since... well, ever.

It all started at Pixel Gallery where Evan Roth of GRL gave a free talk about his work. A former 9-5 architect turn digital artist, Evan is inspiring others to get excited about their city and take back their public space from retailers and advertising. GAP doesn't live here, you do. 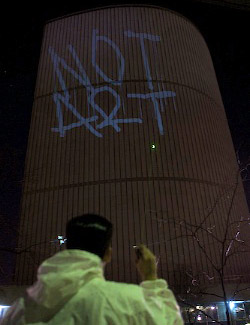 By combining traditional graffiti with some open source programming, a laser, a video camera and a projector, Evan transformed the face of City Hall for the better.

The idea is to be able to rival the size and impact of large advertisements, but make it interactive for the people and allow them to make a statement. The grand vision behind GRL is the sharing of information and cross disciplinary cooperation in the pursuit of mutual inspiration.

Toronto Police watched for an hour or so before four constables and a sergeant came and had a chat. They were supportive of the idea and one was pretty impressed, asking questions about how it worked. Sgt. Liska, of 51 Division, praised the non-destructive form of expression, but asked that no vulgar words or imagery be tagged. As described by him, a "male organ" had appeared, in monster proportions, on the iconic home of city council - perhaps a little too on the mark.

Furthermore, the sergeant explained that by being on a public sidewalk and not doing anything destructive, laser tagging fell well within the bounds of Freedom of Expression (vulgar imagery excluded). 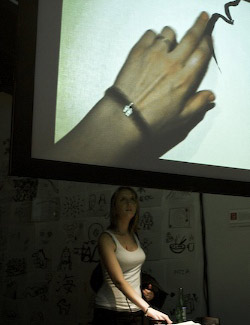 Evan did mention how nice the police were. Usually, encounters with police end up with the gear being shut down and he was amazed that they just left. Maybe Toronto the Good isn't completely dead.

The night ended with Evan's father, Bob, a medical school professor, tagging the names of family members and taking pictures with them in the background. Bob is supportive of his son's efforts and creativity. He bragged (justifiably) that Evan's work will soon be making an appearance at the Tate in London, England.

Included in the gallery were several interactive displays. A demo version of the laser tagging drew some attendees to try their hand, with mixed results. Additionally, for those of you who draw, and those who don't, freehand drawings were being given motion (right) through Zach Lieberman's Drawn installation.

Pixel Gallery is a non-profit space dedicated to interactive digital art. The gallery is hosting GRL's work until May 17th.