Charlie's Gallery had a more than successful opening night on Monday complete with Artwork, a Fashion show and live DJ performances. The room was filled with ecstatic people who were full of conversation and pleased by the display of Toronto's local up and coming artists.

'RybonART' was the featured exhibition by artist Robyn Waffle. Her work consists of acrylic ink/ fluorescent on canvas and board. A 'love induced fairy tale theme' was evident in her pieces, which ranged from Unicorns to People culture to even a lavish Mermaid dancing under the water's edge. Her technique is unique and has a skillful blend of black ink complemented with a rainbow of colours.

The DJs set the tone for the night with a varied music selection from rock to pop to electronica moods. Featured deck masters were DJ House Arrest, DJ Lucie Tic and Fawn Big Canoe. From the start the vibe was set right and the public in attendance was considerately seduced, to maintain a party atmosphere.

The Fashion show commenced at the peak of the night featuring independent labels like Frock.a.Lock and Forrester. The clothes and accessories were glamorous, chic and creatively choreographed to the music.

Charlene Irani is the owner of the space and with the collaborative efforts of Robyn Waffle and others, have formed SLAW. The space, she said was bestowed to her by her parents, which is to be used to establish and feature prominent local artists, in conjunction with fashion and dance notables. After a successful maiden voyage one can ascertain that we should be seeing a great many of Toronto's talents highlight this Gallery and make it the place to come to in representing the status quo of the city's Art culture. 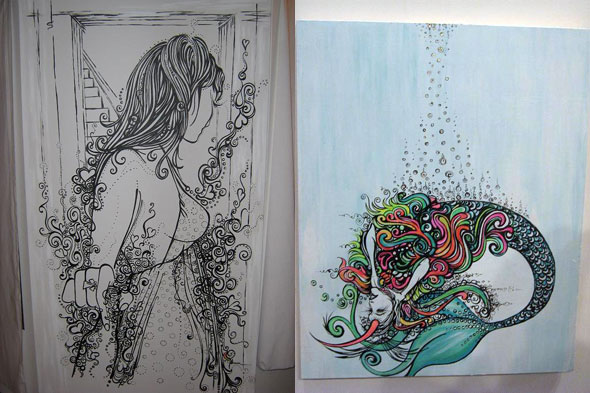