Partying with the National Cartoonists Society at Butler's Pantry

The Canadian chapter of the National Cartoonists Society holds a holiday party in Toronto every year, and this year I was delighted to be invited.

What do cartoonists do when they get together? Read my report beyond the jump to find out.

Organized by illustrator John Martz , this year's party was held at The Butler's Pantry, which is (conveniently) just a few steps away from The Beguiling, one of the best comic shops in Toronto.

The NCS holiday party was no ordinary holiday party. There was a Charlie Brown type Christmas tree, a comic-related raffle draw and a comic-focused secret Santa gift exchange. I didn't win anything in the raffle, but check out the very cool (in a funny and disturbing way) McFarlane's figurine I went home with.

But best of all, the focus was on cartooning! Everywhere you looked, people were talking comics, reading comics...and drawing comics. Blank sheets of 1- and 3-panel strips had been conveniently left on tables along with black markers for those so inclined. I made a feeble attempt at a comic but felt way outclassed by the talent level in that room.

Above, from left to right:
John Martz (editor of Drawn! The Illustration and Cartooning Blog, blogs in RobotJohnny.com), Andrea Wayne Von Kรถnigslรถw (author/illustrator who is hoping to get her comic strip syndicated and whose popular Toilet Tales book was recently majorly revamped and rereleased), and Rosemary Mosco (who posts her science and nature comics at BirdandMoon.com).

These guys are three of the NICEST GUYS EVER, I swear. Their cartoons are syndicated in about 40 papers across Canada and are starting to break into the U.S. market. They also have a compilation of some of their comics in book format. 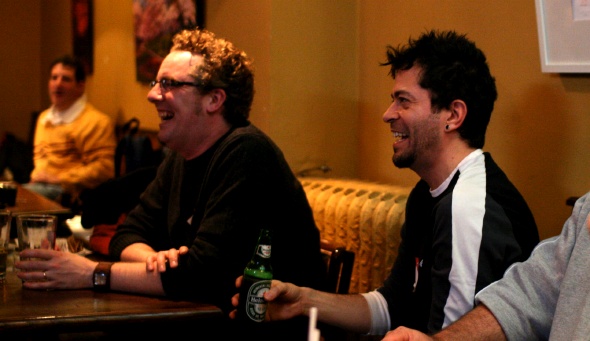 Other cartoonists at the party included:

Sandra Bell-Lundy: Sandra's Between Friends strip is published in over 130 newspapers worldwide.

Jay Stephens (above, left): creator of the Eisner- and Harvey-nominated comic book "The Land of Nod", the Annie-nominated cartoon shorts 'Jetcat', and the Emmy-winning cartoon series 'Tutenstein'.

Paul Gilligan (above, right): creator of Pooch Cafe, a strip that appears in over 220 newspapers. He has a new Pooch Cafe blog and just published a book called Pooch Cafe: All Dogs Naturally Know How To Swim.

Patricia Storms: her book You're My Guy Because... is coming out in time for next Valentine's Day. I'm a fan of her blog: Booklust.

Philip Street: cartoonist, animator and illustrator who draws the comic strip Fisher for the Globe and Mail.

Lar deSouza: Lar has several webcomics, including Least I Could Do.

Scott Cooper: freelance illustrator who produces work for entertainment, education, advertising and animation and is working on a new comics project.

The National Cartoonists Society is one of the world's largest organizations of professional cartoonists. Their Reuben Awards are the equivalent of the Oscars, but for cartoonists.

Even though I'm relatively new to the comics scene, I found everyone at the party to be very friendly and supportive. If you're into creating comics or are curious about the comics world, you should definitely check out the NCS site (which also includes useful info about how to be a cartoonist).

To see more photos from the party, browse the slideshow below: