Avro Arrow, Trudeau's Canoe and Anne of Green Gables at the ROM

One wouldn't think the ROM would put their best stuff in the basement, but that's just what they've done for a current exhibit called Canada Collects: Treasures from Across the Nation.

Canada Collects features a surprisingly eclectic and fascinating collection of 70 or so objects on loan from nearly 50 different Canadian institutional and private collections. Among the standouts for me were the landing gear from an Avro Arrow, The Kiss by Constantin Brancusi, Lucy Maud Montgomery's original manuscript of Anne of Green Gables, the first Canadian maple leaf flag, Pierre Elliot Trudeau's birchbark canoe and a water barrel (above) designed by Irene F. Whittome.

Sadly, the ROM web site does a poor job of articulating the scope of this exhibit. But trust me when I say this one is worth a look.

And while you're there, make sure to ascend up to the fourth floor of the crystal to see a dinosaur skeleton (pictured below) made completely out of lawn chairs. 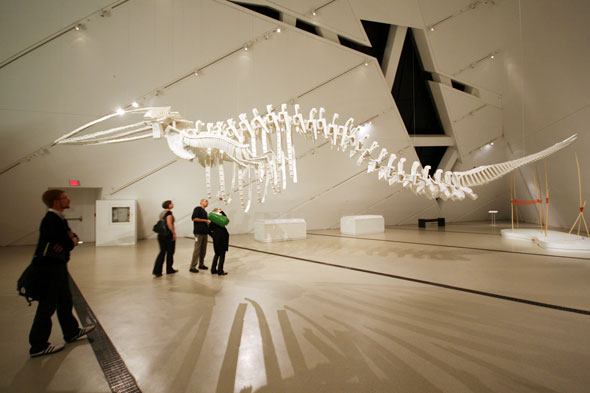