This is not a dance review. I don't know a thing about dance and wouldn't be able to write anything sensible on the subject of dance, particularly ballet. What I can do though is praise YOU dance, a joint project between The National Ballet of Canada and Canada's National Ballet School going on now through January for four to six graders in Toronto.

Last week I sat in the Betty Oliphant Theatre filled with eager elementary school students to watch a performance by apprentices from The National Ballet of Canada. Truth is, I covered this story because I wanted to take some photos of ballet dancers on stage. I left feeling envious of a much more sophisticated and engaging introduction to dance then I ever had.

I still remember my excruciatingly confusing introduction to ballet when I was in grade school. Our teacher's introduction to ballet barely covered ballet shoes, tutus, spinning and jumping. With that, we would go to see an agonizingly long two-hour performance with people dancing and jumping, but none of us were sure why (I doubt the teacher knew either). After the performance, we talked more about ballerinas and how much it hurt them to stand on their toes, and that was it. None of it was engaging or meaningful and sadly contributed to my current utter lack of knowledge or appreciation of dance. I was left turned-off of and not any more educated about an art I still find hard to fathom.

And so I can't help but applaud YOU dance, for educating and introducing dance to young students in a much more engaging and exciting way. 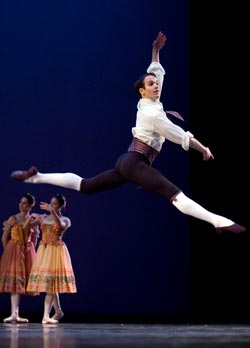 The project exposes young audiences in grades four through six to classical ballet through workshops and performances.

Held in the schools, the 45-minute long movement workshops provide a hands-on learning experience for both students and teachers. Resources are available to teachers to continue exploring dance as an art form and the various ways it can be used to enhance learning in the classroom. The workshops are designed to encourage physical activity and imagination, introduce the idea of dance as an art form and a means of physical, emotional and creative expression.

Following the movement workshops, each class will attend one of the 35 performances by apprentices from The National Ballet of Canada at the Betty Oliphant Theatre. The performances are an hour in length and are enhanced by pre-performance and post-performance discussions and curriculum-based teacher resources for each classroom.

I didn't participate in a workshop in the classroom, but it was obvious the kids in the theatre had. Eager to watch and learn, with pens and paper at the ready, the response to the performance was exciting. The environment was not stifling like student performances I remember as a kid where any laugh, cough or movement was "ssshhh"ed. Each of the four dance segments in the performance were introduced, briefly explained (that's right, explained, ballet is much easier when you know what they are dancing about) and kept short, no longer than 15 minutes.

Equally enjoyable was the fact that each segment was significantly different, with new costumes, lighting, music, styles and movement. In the last segment, the students were given tambourines to play with as the dancers competed in a historic form of, as they were told, "So You Think You Can Dance."

YOU dance performances and workshops run from October, 2007 through January, 2008.

In the slideshow below you will see the variety of each of the four dance segments during the performance and some of the student interaction before, during and after the performance.

One of the most poignant moments of the afternoon was after the performances when 11 year-old Toronto Maple-Leaf jersey-wearing Alex went up to dancer Ian Parsons to ask for his autograph (pictured below). When I asked Alex if he had ever asked for an autograph before, he started listing Maple Leafs, starting with Mats Sundin. 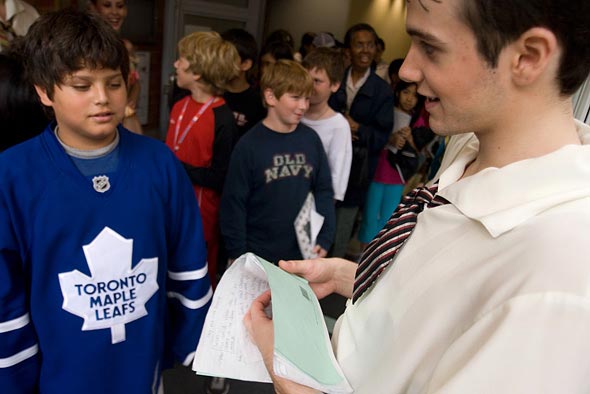