Poetry and Film, Together at Last

Sometimes, the stars align and make my world a much more exciting place. Case in point: this Sunday, the Liaison of Independent Filmmakers of Toronto is presenting Poetry Projections II, a showcase of ten new collaborative works bridging my two favorite things in the whole world â film and poetry.

The ten filmmakers and ten poets will all be on hand at the Studio Theatre at the York Quay Centre this Sunday at 3pm to discuss their cross-disciplinary collaborative process and address some of the challenges and opportunities that comes with trying to convey a message through both film and live poetry. 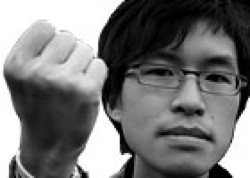 Poetry Projections II is being held in conjunction with the International Festival of Authors that kicked off earlier this week, and will feature short film by Toronto filmmakers including Annette Mangaard and Madi Piller, as well as readings by renown local poets including Gerry Shikatani, Margaret Christakos, and Goran Simic.

The highlight of the event for me personally will be seeing the collaboration between Mangaard and poet Ray Hsu. A UofT graduate, self-professed slacker, and phenomenal wordsmith, Hsu has been gaining critical acclaim for his work both here in Canada and across the world. I recently purchased his book Anthropy, so you know I'll be getting that signed on Sunday.

Poetry Projections II runs from 3-5pm on Sunday, October 21 2007, at the Studio Theatre at the York Quay Centre. More information can be found on the website for the Liaison of Independent Filmmakers of Toronto.