Sadly, all good things must come to an end. And yesterday was a day of endings. By the end of the night, we had witnessed the end of the 2007 Canadian Festival of Spoken Word, the end of Vancouver's three-year reign as National Slam Champions, and the end of my trip to Halifax.

Before we get into the results of the National Slam Championships, I thought I'd share a quick video of Toronto poets Eddy da Original One and Dave "Big Deal" Silverberg and Otttawa poet John Akpata jamming at the Art Gallery of Nova Scotia. As part of the day's activities, poets, musicians, and artists came together to participate in a showcase to create musical and spoken pieces based on pieces of art. The above video is just one example of some of the fun that all the participants had during the day.

The culminating point of the festival this year, of course, was the National Slam finals that took place at Coconut Grove last night. Standing-room only would be an understatement for how packed the venue would get even twenty minutes before the slam began: the group of several hundred fans was one of the largest crowds ever assembled for a spoken word event in Halifax. 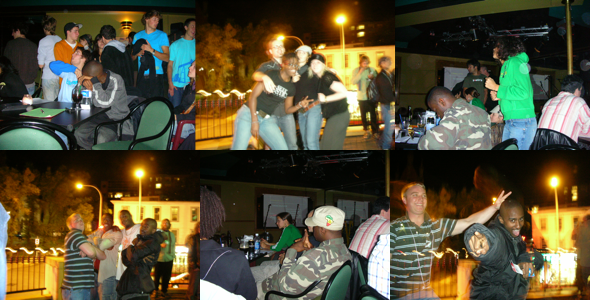 After honoring the poets of honor this year — Darek Dawda and the late Rita Joe — the competition began. The spoken word was intense and raw, dealing with issues such as absentee fathers, crooked cops, and pussies. Seriously. In the end, the hometown team of Halifax came out on top, with the Toronto teams coming in second and fourth.

So the 2007 Canadian Festival of Spoken Word wrapped up last night with style — I'll have a full recap with (lots of) photos later this week, and I'll be following the Toronto teams next year as they travel to Calgary for CFSW08.