The torrential rainfall in Halifax yesterday did nothing to deter the enthusiasm of the poets and fans that had assembled for the 2007 Canadian Festival of Spoken Word; in fact, it may have inspired them.

In a day where activities included an open mic at Dalhousie, a panel on poetry as a voice for change, and guerilla poetry on the rain-soaked streets of Halifax, the poets from Toronto left their mark on the day in many many ways.

An early afternoon open mic session at Dalhousie kicked off the day's proceedings, allowing non-competing poets to display their talents. The session was hosted by Toronto's own Tomy Bewick, and featured sets by poets from across the country, including Torontonians Jeff Cottril (video below), Sereena, and me. After the open mic, a girl from Moncton, NB, came to me amazed that the art form of performance poetry existed: if anything, the open mic had at least converted one new fan.

The open mic was followed by a panel entitled Voices for Change, which featured poet Ardath and hip hop artist Hermit from Halifax, as well as Spin from Toronto. (We'll have a more in-depth look at Spin's work with Toronto youth -- and a few words about the current controversy at Ryerson University -- a few weeks from now on blogTO.) The panel discussed ways that spoken word and music can be used as a tool for expression of the underrepresented, and as a 'weapon' for social change. Spin opened the session with a poem he wrote about the education system, and I was able to capture a bit of it on video below. 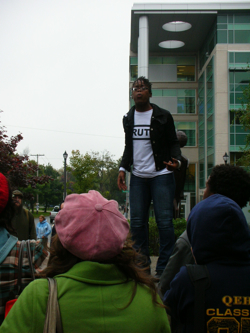 By the time the panel was over and the guerilla poetry was about to begin, the skies had opened up and water was falling in buckets. This didn't stop the poets, of course, and a group of almost thirty people hit the streets bringing poetry to the public. As you can see in the photo of Toronto poet Truth Is... here, quite a few people on the streets stopped to hear the spoken word despite the rain.

The poets had a few hours to dry off after the guerilla poetry before the second round of the National Slam at Ginger's Tavern. As you can see in the video of Dwayne Morgan at the top of this post, the Toronto teams brought their A-game, and ended the night ranked second and third, just after returning-champs Vancouver. Boonaa Mohamed, a member of the Toronto Up From the Roots team, received a rare perfect score of 30 for his piece in the second round, bringing everyone to their feet to deliver a standing ovation.

Tonight's final will feature the top four ranked teams to compete for the championship: Vancouver, Halifax and the two teams from Toronto. In addition, the day will feature a youth showcase, a musicians showcase, and a poetry challenge at the Art Gallery of Nova Scotia. I'll have a full round-up of the final day and the status of the Toronto teams at the 2007 Canadian Festival of Spoken Word tomorrow.