Censorship at the York U Bookstore

Apparently York University has an issue with the penis, especially if it's crocheted and pierced.

Just 7 days after stef lenk and Shannon Gerard's Playing Doctor was installed in the front window of the York University Bookstore; the higher-ups at University demanded it be removed. The reason? Some nameless professor who lives on the campus found it offensive and was afraid his son might see it.

I haven't yet made it up to the Art Gallery of York University (AGYU), FASTWĂRMS/Playing Doctor exhibitions, so I asked the gallery's Assistant Curator, Emelie Chhangur to describe what was in the window of the bookstore.

"Playing Doctor was comprised of lenk's operating table and Gerard's cut out figures of a man and a woman with crocheted boobs and dinks, (the parts of the male/female body affected by cancer). Gerard's books, and video + small "kits" contain DIY instructions on how to check yourself for testicular and breast cancer. lenk's operating table brings it home with reference to the children's game, this time with hand drawn body parts and a hand painted figure on the table. The art work is fantastic, fun, accessible, and educational."

How a giant board game and information about cancer could taint a child is beyond me.

If being censored wasn't enough, while AGYU staff were removing the art, the bookstore staff made sure it was known they didn't like the work either and told Chhangur, "I am glad you are finally getting that eyesore out of here."

Although no one knows if it was the nudity or the crocheted Boobs and Dinks, Chhangur suspects, "it was the piercing on the crocheted penis on the cut out male figure and the open discussion about testicular cancer. Breast cancer seems socially accepted as is the depiction, (real or crocheted) of breasts but not penis' or testicular cancer. Most of the complaints came from grown, white, heterosexual, men."

Considering early detection of cancer is key to beating the disease and the Canadian Cancer Society encourages both men and women to learn how to self exam for lumps, it's a sad irony that the work was judged as offensive and called an "eyesore".

The ambiguity of York's position has left the artists in the dark and understandably upset.

Gerard's Boobs and Dinks; Early Detection Kits are a response to her own family's cancer scare when her partner found a lump in a testicle last year. And although she's only got assumptions to go on said, "I am most disappointed that my project that is supposed to break down barriers has caused this kind of negative reaction. At the same time, it makes me feel like I have a good idea going-- strong reactions to a strong project. It is an emotional project and now I can see that not everyone's emotional response is the same as mine to this fear about human frailty.?"

"It's COMPLETELY Ridiculous." Says lenk. "It pisses me off, and I find it really nauseating and super surprising, both 'coz we're in a city (as opposed to suburbs/small towns, that are generally far less tolerant of anything sexualized at all, whether it be nudity or homosexuality or whatever), but that it happened at YORK. Which is kind of tacitly known to be the more "arty" of Toronto's universities? So much for real education."

Hopefully in the coming weeks the secret collective that ordered the work removed will issue a formal statement about their decision.

The art is now installed in the lobby of the AGYU where, "we can take the time and discuss the work with all visitors, even the ones who had difficulty with it," says Chhangur.

As for the Bookstore window it didn't remain empty long, it's currently displaying toilets.

Playing Doctor is on view until 9 December at the AGYU, (Accolade East Building, 4700 Keele Street). 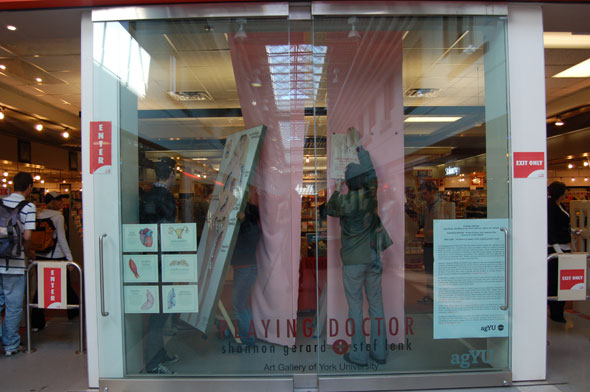 Photos courtesy of the AGYU.