Your Guide to Nuit Blanche 2007

We're mere days away from one of the city's most anticipated artistic events of the year, and there's certainly no shortage of buzz going along with this year's Nuit Blanche. Dubbed the "free all-night contemporary art thing", the Parisian-inspired Nuit Blanche will go on this Saturday from 7:03pm to sunrise on Sunday.

For those who had the chance to see some of what went down at last year's event, and even for those who missed out, there was an unmistakable feeling of excitement and energy surrounding the night. This year, the 12-hour arts fest will be bigger than ever, with expanded zones and a surge in artist participation, it's sure to be one hell of a night.

We've got you covered with an exhaustive guide and our picks for what to check out in each of the zones, as well as an interactive map for browsing the exhibits. If that's not enough for you, we'll be liveblogging the whole thing starting at the crack of 7 on Saturday. Keep on reading for our picks, a map of the every venue, and more after the jump.

Nuit Blanche breaks the city up into three art zones. Each of these zones has a single curator, who oversees a dozen or so exhibits and installations that all follow the curatorial vision. Beyond that there's another dozen or so independent exhibits in each zone that are created and led independently. We'll cover both types of exhibits.

The organizers have really expanded the size of the zones this year, and along with that have also increased the number of exhibitions and installations by quite a bit. This year's art thing now encompasses just about the entire downtown core from the Junction to Queen East.

Take a look at the interactive Google map below, which includes every venue participating in Nuit Blanche and our own picks for this year's event:

The overall theme of the night is spatial transformation, allowing visitors in exhibits to rediscover the space, neighbourhood, and the city at large through artistic movements. We like this event because it makes you re-think the use of public and private space in the city, and challenge your preconceptions about what art is.

Curated by Rhonda Corverse, the northern Zone A will have visitors expecting the unexpected, examining unsettling themes in urban societies including fear and danger, mass communication, and disorientation.

Heads Together is a mobile exhibition that will move throughout the zone that's so off-the-wall I had to include it in the picks.

Be sure to look out for these dancers as they do everything they can to ensure their heads remain in contact with each other. They'll interact with passers-by as well, in what way I have no idea, but this is one that you'll just have to see by chance.

Lower Bay subway station is open again. Be forewarned, I was hesitant to even include Lower Bay after my previous experiences with it. At Doors Open, the line to get in stretched on for hours, and you'll likely encounter the same thing on Saturday night.

If the spectacle of seeing the oft-illegally explored station isn't enough, artist Kristen Roos will curate an exhibition that explores infrasonic and low frequency sounds that have traditionally been associated with paranormal activity. Creepy.

All three courts supposedly "correlate" to each other, and visitors can experience them individually, or all at once from the mezzanine. This is a great example of an installation that reinterprets conventional uses of space and adds a whole different dimension to the environment.

Make sure to bring your martini shaker to the Secular Confession Booth on Hazelton Avenue, because you're going to have to wait a while behind a veritable mob of filthy Yorkville secularists.

Some predicted confessions? 'My Lamborghini is an automatic!', 'Ultra Supper Club is even more pretentious than it sounds!' or 'I was the one who burned down Sassafraz.'

String of Diamonds by Newmindspace
15 Devonshire Pl. (University of Toronto)

Pillow fightin' and subway partyin' Newmindspacers Kevin Bracken and Lori Kufner will light up Trinity College Field with strings of glistening white lights that move gently and shimmer with the wind.

I just couldn't NMS' latest wacky effort to engage the city, especially considering we have one of their biggest fans, one Mr. Ry C on staff.

I'd be remiss if I didn't recommend Church Street's stab at a Red Light District that I previewed a couple months ago. Beyond the usual, wonderful oddities you're likely to encounter on in the Gay Village between 7pm and 7am, you're bound to be exposed to some "mature content" bathed in red light revealing "sexy silhouettes". Yowza! Toronto the Bad, indeed.

See the rest of the exhibitions in Zone A or get your very own printable map (PDF).

The east-end zone is curated by Michelle Jacques will look at culture, diversity, and heterogeneity in society and will look at the roots of the diverse population of Toronto, hoping to bring together neighbours around the city. 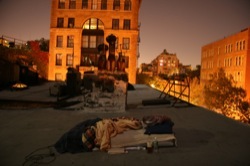 This is going to be one of those exhibits that you'll want to visit throughout the night to see how it progresses. The plan is to empty the contents of a home to the intersection of Beverley & Cecil where they'll be arranged exactly as they were in the house.

In the process, a lived-in house is vacated, and the privacy of the home is brought out into the public for all to see.

AGO's End of the Party Party

Celebrate the last admission you'll be able to get in 2007 (and a good part of 2008), as AGO closes down on October 8th for eight months to reinstall the 5,000 works of art in their galleries.

A portion of the gallery will be transformed into a party room, and performance artists "Ina unt Ina" and Ryan G. Hines will be the host the evening. You'll be invited to create going-away postcards, and groove to some music. At the very least, this will be one of the last chances you'll get to see the AGO before people start screaming bloody murder over Gehry's new design for the building.

Think of this as a contemporary Last Supper. Perunovich will be circulating a "bread and bean" dish (isn't that evocative?) to 12 audience members at her table with a cultural and social inspiration behind it.

As an added bonus, that delicious "bread and bean dish" might be just the pick-me-up you'll need to keep on trucking at 3am right on through till sunset.

Steam Up in the Steam Banya
The Roundhouse, 225 Bremner Blvd.

The Steam Whistle Roundhouse will have a number of "Steam Banyas" (Saunas, for the uninitiated) setup where you'll be able to sit back and relax while enjoying Russian art, videos, shorts, animations, and "refreshments" (one would think of the alcoholic variety, but who knows). I bet they'd go great with your "bread and bean dish."

They're advising that you bring a swimsuit, towel, and sandals, but with a low of 10 degrees over Saturday night, I'm not betting many people will have those at the tops of their "to bring" lists. 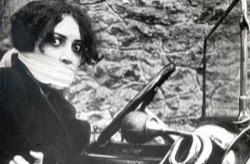 Just when you thought we were done talking about TIFF, eh? As a shout-out to my moviesTO compatriots, you can catch multiple screenings of Feuillade's classic 1916 flick, Les Vampires at AGO's Jackman Hall.

They start off the program, which consists of 10 episodes at 7pm, and repeat it again at 2am. Personally, early 20th century film (and this photo alone, yeesh!) is enough to scare the crap out of me, nevermind vampires, so this is sure to be a creepy theatrical experience in the middle of the night.

See the rest of the exhibitions in Zone B or get your very own printable map (PDF).

Artsy West-enders are going to expect a lot from Zone C, curated by Camilla Singh, and it sounds like it's going to deliver. Appropriately enough, the western zone will focus on the altered state of mind, dreams, imagination, and the night.

Australian-born Craig Walsh's Incursion is easily one of my top picks at Nuit Blanche, and has been since the moment I heard of the idea. Craig's going to take the Great Hall storefront window at 1087 Queen West and turn it into a gigantic aquarium, complete with oversized fish swimming around.

This one is right up the alley for the curated theme, and will surely be a popular destination for Nuit Blanchers on Saturday night.

Living in a busy city like Toronto, many rarely even are able to see the stars due to light pollution from street lights, billboards, and so on.

Artist Stephanie Avery brings the sky back to the city at a baseball diamond in Stanley Park. 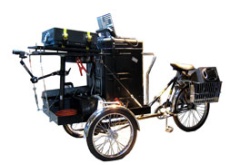 Made in Toronto by Graffiti Research Labs
Mobile

The guys from renowned tech-art consortium, Graffiti Research Lab are well-known for inventing the net meme LED throwies and their "weapon of mass defacement", L.A.S.E.R. Tag.

Now, they've brought that same technology to Toronto and it's mobile, making use of open source technology that allows audience members to write and draw with lasers, reclaiming public space as their own. The coolest part about this? This "graffiti" leaves no marks or damage to the surface on which it's used on.

We've looked at the tumultuous story of the artist studio at 48 Abell for a while now, but this is your chance to see the eulogy of the historic building that will be bulldozed to make way for new condo developments on Queen West.

The "Bohemia live tableau of billboard artwork" will feature video of artist Jessica Rose's "Funeral for a Building" and should be worth seeing in its intended context before they flatten infamous structure. 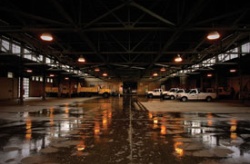 The art of displacement called Parkour has French origins, and involves getting from point A to B no matter what the obstacles (buildings, walls, etc.), using the body as a tool.

The Parkdale venue at Queen West and Cowan will feature performance artists from pkto, Canada's largest Parkour community that is located here in Toronto.

See the rest of the exhibitions in Zone C or get your very own printable map (PDF).

A new experience for this year's event, txtART will be an interactive online exhibition that you'll see throughout the city. At almost every exhibition, you'll see an extension number that you can dial with your cell (or optionally, download ahead of time onto an iPod to consume via the txtART site), and listen to the curatorial message for the installation or the artist's explanation.

It will also let audience members send SMS messages with their thoughts about the installations or Nuit Blanche at large, that will be projected onto screens throughout the city. 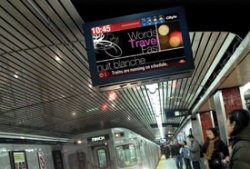 A concept returning from last year's event, Words Travel Fast will be seen on all TTC subway station platforms, and will feature the written works of Toronto authors Emily Pohl-Weary, Emily Schultz, and Zoe Whittall. The works featured will be "motion poems" involving motion graphics and poetry.

The absolute best part about this is that the TTC will be keeping selected services running all night. Included in the special service are the Yonge-University subway between St. George and Eglinton, and the Bloor-Danforth subway between Christie and Broadview open all night to help NB'ers get from point to point. See the TTC service availability for Nuit Blanche for more details.

Of course, blogTO will be providing coverage of the event throughout the weekend, featuring photography and write-ups from some of the best and brightest Nuit Blanche hast to offer.

Also be sure to check out our live blog for the event, which will go live on the front page at 7pm on Saturday night and will feature live photos from the exhibits and commentary from blogTO'ers. Keep your eyes peeled for us sporting the blogTO logo all night long, and see you on the streets!