son/lumiere 2 at the Gladstone Hotel

Last night was the second experimental sound and light experience of son/lumiere in the Gladstone Hotel's Ballroom. It started at 8:30pm sharp and before the first band, Epigram had finished their set the place was at capacity.

The music was more eclectic than the last event, opening with new comers to the experimental music scene Epigram, whose sound is in the vein of Explosions in the Sky and filled the Ballroom with a wall of instrumental post-rock that held the crowd spell bound. 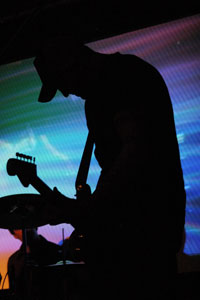 They were followed by the folky, prog-rock sound of Ragni and when I turned to look out at the audience couples were cuddling and sitting on the floor.

Holoscene recharged the crowd with their ebb and flow of ambient textures and raging volumes. Unfortunately the witching hour of Thursday was upon the crowd and people who had to get up this morning started to filter out just before the doom-metal duo Nadja hit the stage. However a crowd held out until the bitter end for the very experimental, Dead Can Dance esq. Still Coiled.

Four hours can be a bit much on a weekday night, but the cats from holoscene who host son/lumiere know what they're doing and have added the magical touch of Theo Buchinskas whose live visual projections erase the time and completes the total sensory experience.

I would be remiss to not mention that between bands animated shorts by Nick Fox-Grieg were played and I highly recommend you check out his hilarious Foxhole Manifesto.