Nuit Blanche is upon us. The all-night event, running tonight from 7pm until tomorrow morning at 7am, will see close to 200 exhibits and installations around the city, so it's no doubt that this is one of Toronto's most anticipated art events of the year.

The forecast is looking good tonight, if not a little cool, dropping to a low of 11 degrees, so it'll be worth bringing some layers for your artventuring. If you don't yet have any plans for the night, be sure to check out blogTO's Guide to Nuit Blanche, as well as some fashion-specific gigs.

Keep an eye on this post as we'll be updating it live all night with photos and highlights from the exhibits. Let's get started!

6:11am
And that's a wrap. Didn't quite make it to 7am, but just about everything is closing up shop it sounds like at this point anyway. It's been a blast, but my fingers are going to fall off from tapping this screen, my legs are rubber from 11 hours of walking, and my eyes are seeing double.

Overall, a good Nuit Blanche, but I got the impression from blogTOers that they were slightly underwhelmed. Summary on the way later today!

5:31am
Most of the exhibits are packing up early, and the streets are looking pretty quiet, but brave blogTOers are still out on the town scouting for gold.

Laura checks in, calling it a night and says her highlight of the night was the stunning dance installation at the Casa Loma Stables. Her biggest disappointment? Church Street. "Where was the art?" True enough.

Tanja, "If your parents never let you have a zap/flash screen as a kid, you'll want to visit the Campbell House at Osgoode. They've got em up in every room."

5:20am
Jerrold says the word of the night from many visitors to Zone A is "underwhelming" but Willie Doherty's Non-Specific Threat was incredible (especially finding it).

4:15am
Lower Bay was fantastically creepy at 4am. What the photos don't get across though is the eerie infrasonic effects that the subway cars along the track produced. For sure one of my highlights of the night so far. 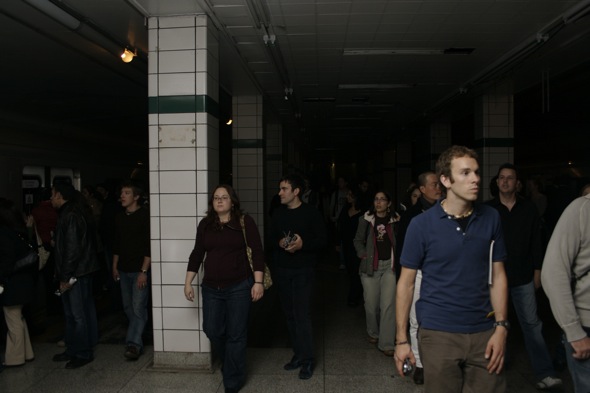 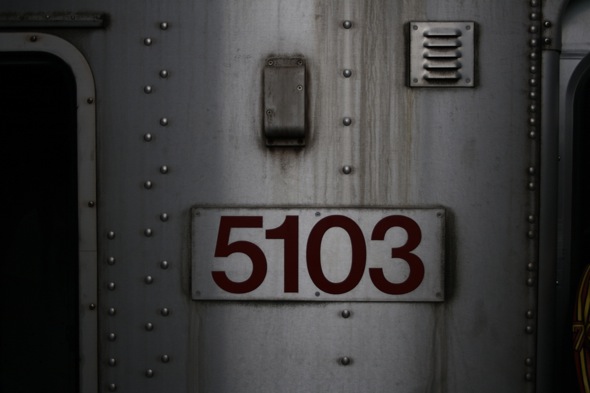 4:08am
Streets are clearing out and I think I have broken thumbs. Tanja was partying on the Queen streetcar with girls and purse stereos. Tim dug the Bellwoods $2 popcorn and tennis court singer that was drawing a good crowd, as well as writing on the wall at XPACE.

2:40am
Roger loved the cathartic sledge hammer and goggle smashing at the Gladstone. Still tons of people on the street everywhere.

2:21am
Word at King's College Circle at he Event Horizon project from Richelle that "E.T. saves Yoda" Awesome. From Tanja in Parkdale, "Parkour ninjas freaking out the cabbies at Queen overpass" SO awesome. 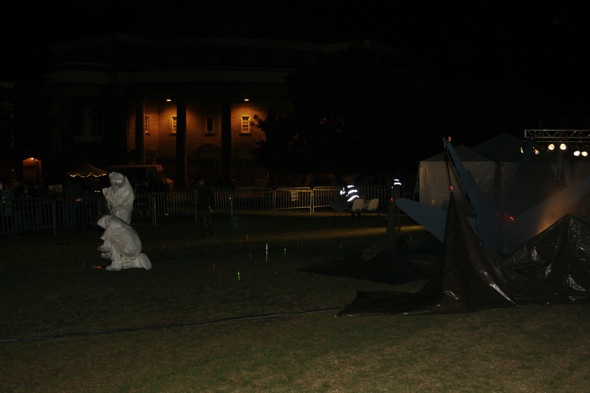 1:45am
Second coffee break. Lots are thinking the same at Timothy's. iPhone needs a recharge after 6 hours of heavy WiFi usage too. 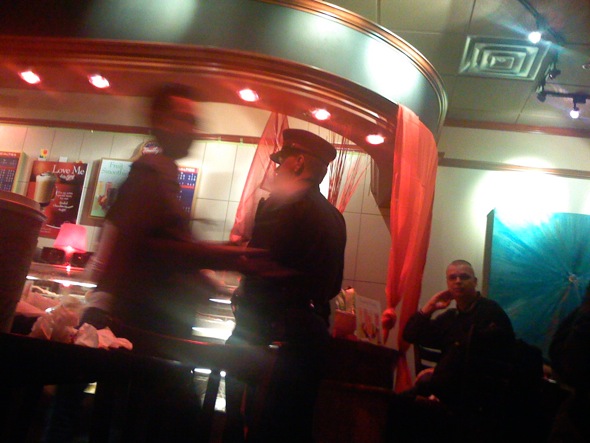 1:17am
Great hidden gem on Church at Alexander called Secret Hearts, a PostSecret-like exhibit where visitors write their secrets on tags and string them to the fence, as well as read others' secrets.

I just spoke to Jessica at the exhibit and funny enough, she was featured in our Flickr Forum on Friday. Delightful girl; small world! See photos 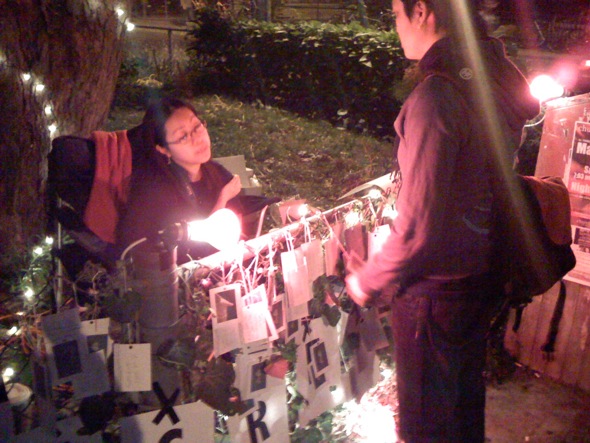 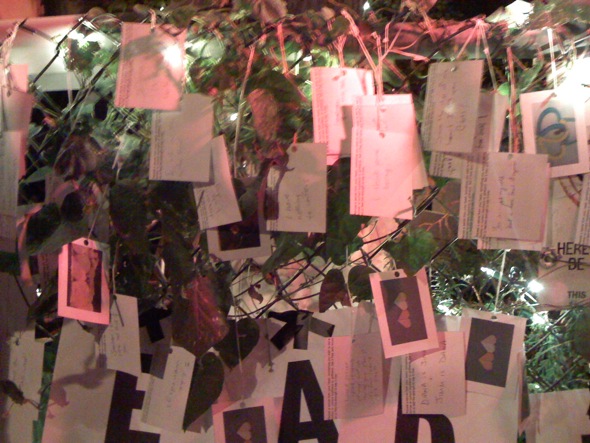 12:43am
Joseph and others are calling String of Diamonds a disappointment. More like a "string of lights" in the sky he says. I hate to say it, but he's dead on. Even in the project's photo, NMS depicted a totally different image of what to expect for this. 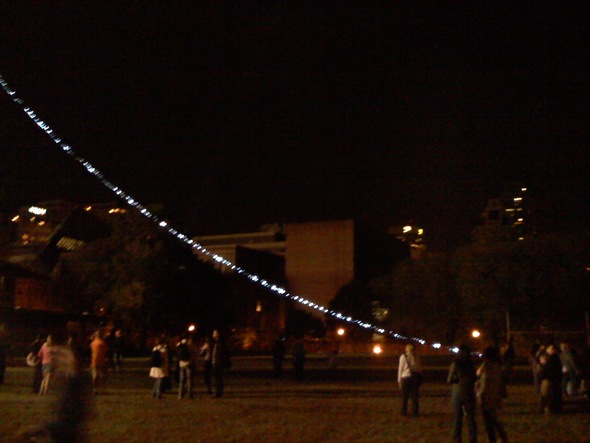 12:36am
There's a huge line for Kristen Roos' The Ghost Station at Lower Bay that stretches on for at least an hour. Big surprise! I'll wait until 4 or so to try again.

There's a very cool exhibit on East Cumberland, Night of Saint John. Take a look for yourself! 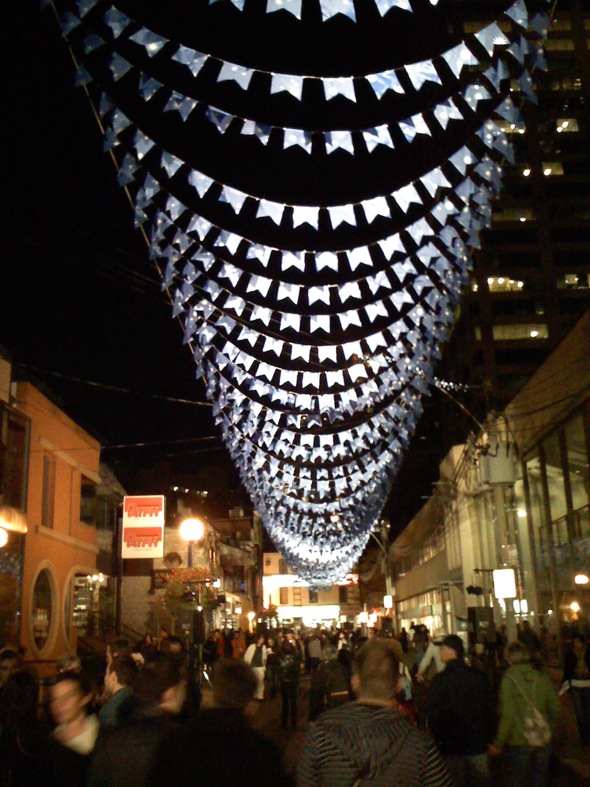 12:02am
Roger has some nice photos up of Church Street. Joseph isn't too impressed though saying it's just like any other night only "more lights".

11:08pm
Rebecca says to take advantage of the DIY bike lanes on Queen West. Meanwhile Roger is keeping an eye on the Northbound Leather fetish fans trying to entice visitors in for some "tame flogging or just to play dress up" What time is it again?

In other news the older crowds and families are starting to clear out so lines aren't so bad anymore. We've been hearing complaints about crowding all over the city all night but really, it just speaks volumes to the success of this event.

10:47pm
Tanja says the apartment move at Beverley is going well, "anyone want to help me with this bathtub?" Joseph says being placed next to a Starbucks at Queen & Simcoe is the "irony of the night"

Also, I'm thinking they should close Queen St (among other streets) to cars next year. There's people spilling off the sidewalks into the streets where the typical reckless Saturday night drivers are motoring down the street. 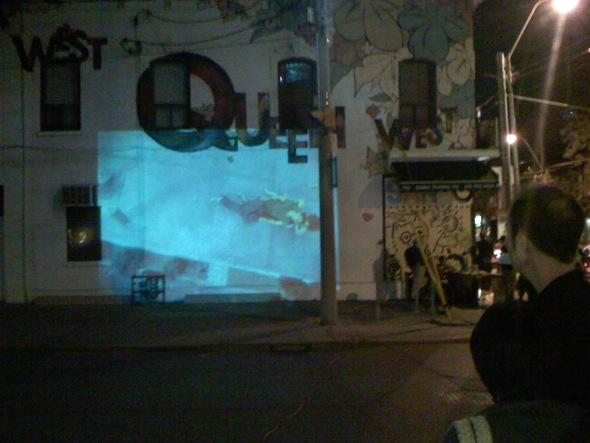 9:55pm
Ry C called to say "there's too many god damn people" everywhere. Meanwhile Joseph checks in to say Trinity Bellwoods is barren and they need more stuff between zones, and that the weather is beaut tonight. Couldn't agree more with all the above! 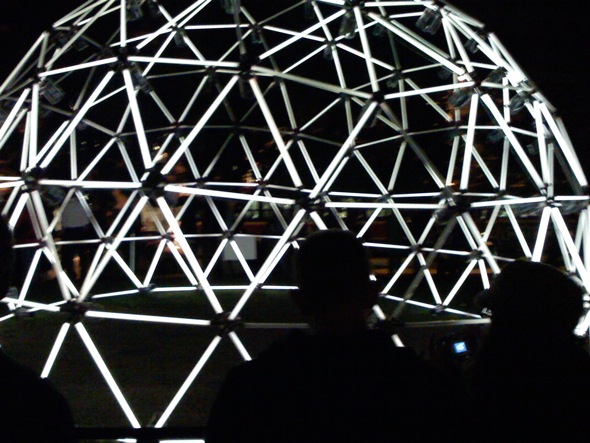 9:12pm
Joseph says two guys driving around with a boom box dancing and filming it on Queen while yelling "We are all artists because we are all going to die. Do something!" Riiiiiiight. Also you can take home a piece of the carpet from Secret of the Syncope on Queen and photograph it for next year's exhibit. Fun.

9:05pm
Sookie: "Hazelton ave is brimming with ppl revealing their secrets at the Secular Confession Booth. Seems to make for some happy customers."

8:48pm
Joseph let me know about a really cool exhibit at Queen and Shaw where you can interact with your iPod, Play by Hear. On my way there now. 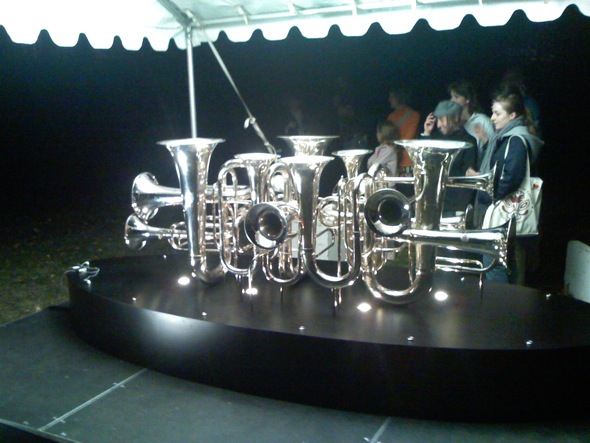 8:43pm
As blogTO editor Tanja reports, "the masses have converged at Bloor and Avenue, it's quite the sight" Hart House is doing some great stuff with Night School and is also jammed. 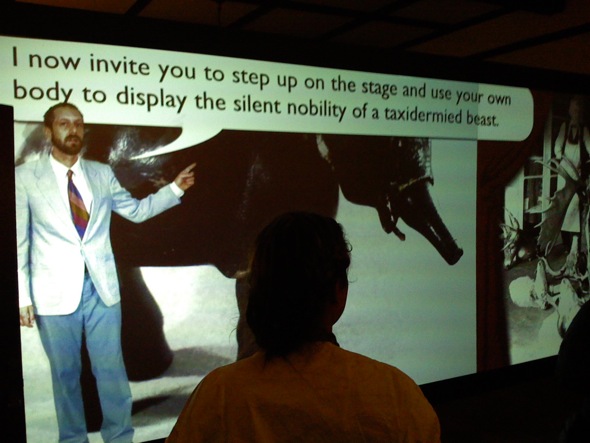 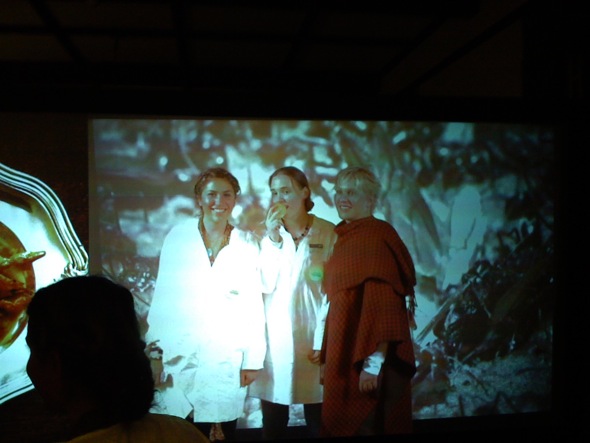 8:04pm
Gardiner museum is PACKED, as is the entire vicinity around the ROM. 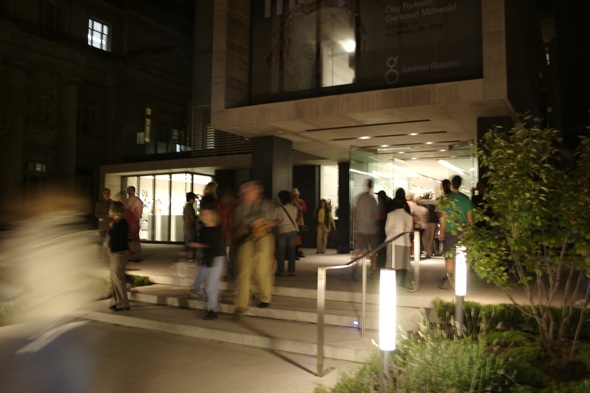 7:51pm
blogTO's Joseph reports the TTC is sold out of day passes at multiple locations with many others reporting the same. D'oh!

7:40pm
Only 40 minutes in and I've already found one of my mobile picks. Heads Together making their way through Queen's Park near the Diaspora Dialogues tent. 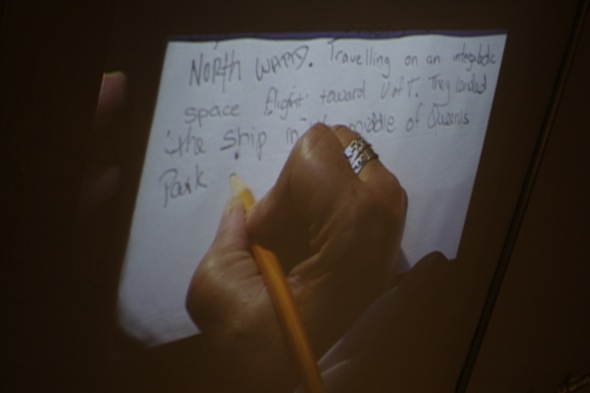 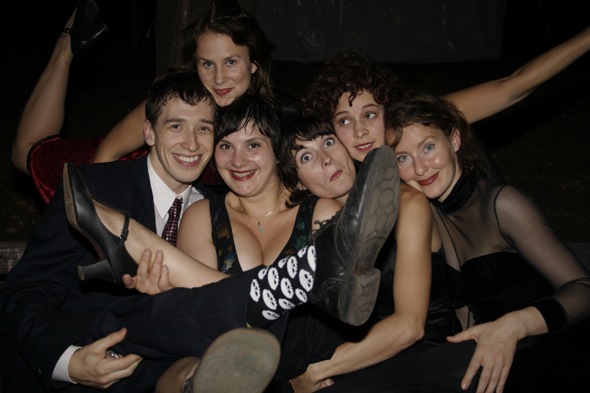 7:30pm
A lot of people have no idea what's going on tonight. Keep an eye on those ones for comedy gold. It's pretty early still, so there's lots of chatter of "is that real?" and "of course it's performance art." 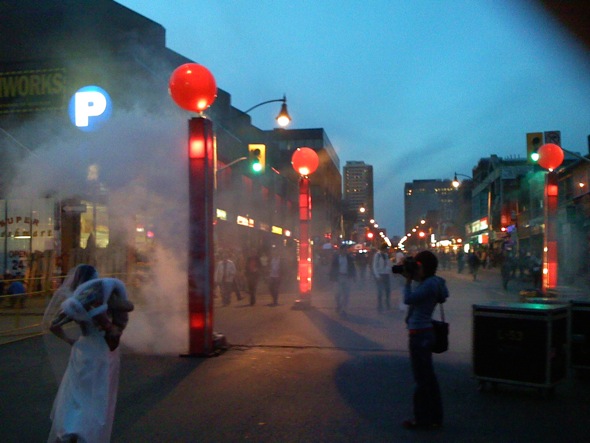 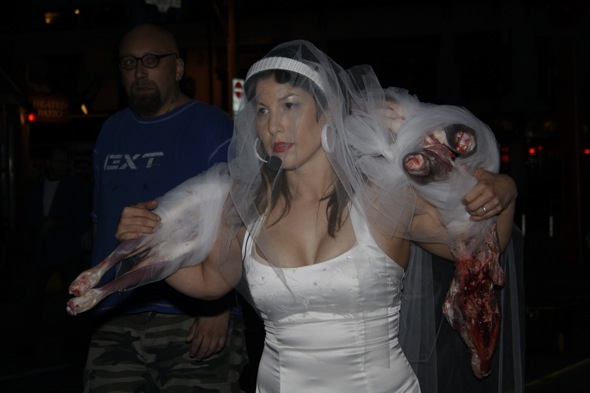 7:05pm
The Hydro network is about as reliable as the city's transit promises so this will also be an exercise in patience. Church street's Nightless City is slowly coming to life. 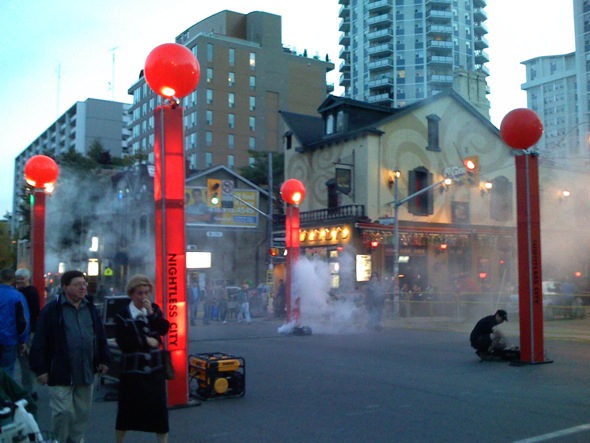 6:15pm
And we're on! This will be a bit of an exercise of Toronto Hydro's OneZone network so we'll see how that goes.

4:17pm
We're mobilizing the blogTO crew in anticipation for tonight's event. Keep an eye out for blogTO'ers sporting our colours and give us a shout! 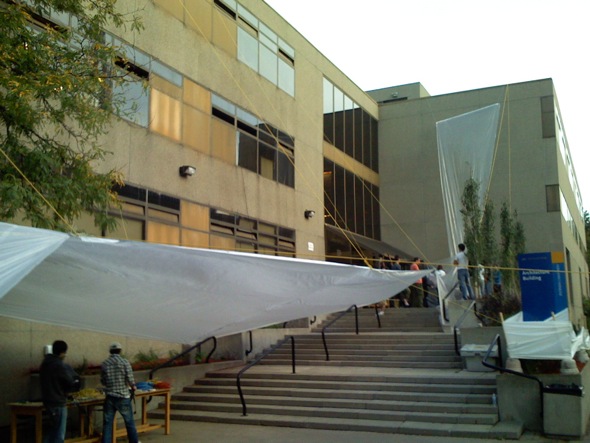