Jon Claytor: Until the Break of Day

It's no coincidence that Claytor's last few exhibits have coincided with the Toronto International Film Festival, or that over the years his work has become popular with celebrities from the film and television industry. There is a cinematic quality to his work, a fascination with character and stillness that's alive with ambiguity. Of the 15 paintings in this years exhibit, 11 feature a solitary subject frozen in a nuanced moment of an intensely private monolog. His characters appear in transition, not so much in life, but in the relentless cycle of moods.

"The painting is never finished so much as paused, and, like a snapshot, only a moment is captured of an ever-changing life." - Jon Claytor 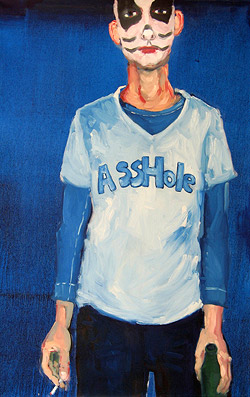 Right in the heart of Yorkville (49 Avenue Road, just north of the Four Seasons), the exhibit is a few steps away for the drama and congestion of TIFF and offers a perfect escape from, and compliment to, the festival.

Unaccustomed art gallery visitors need not fear, the staff is friendly, you won't need to worry about how you're dressed or what you know about art (if you're like me, it's not much) and you can bring a coffee or tea in with you. The Ingram Gallery is open Tuesday - Saturday 11AM-5PM and if yesterday's heat continues, the air-conditioning is a welcome relief. Even if you're in the area when the gallery is closed, you can still stop by to see 'The Asshole' (pictured right) hanging in the front window facing Avenue Road. Definitely worth a look.

Claytor's solo exhibit will be on display until September 29th. That evening, as part of nuit blanche, the gallery will be open all night screening Claytor's new super8 film, Lost & Looking. The film is presented as a diptych on two screens simultaneously and will be projected onto the windows of the gallery throughout the night. Another film by Claytor called No More, has been selected for the 2007 Atlantic Film Festival.