A snapshot of Nuit Blanche

I didn't attack Nuit Blanche with a battle plan. I had too much gear from the C.N. Tower shoot, lingered too long on the U. of T. campus and took in a fraction of what I thought was possible in 12 hours.

Anyone out on the streets last night can tell you it was a zoo of pedestrians, cars, chartered buses and cyclists. Galleries and bars were beyond capacity, the crowds were 20 people deep and line-ups around the block. Needless to say, it simplified what to see.

A friend and I had an 11pm timeslot to take photos from the C.N. Tower and were confined to the downtown core. So we did what any self respecting artist does, we went for free beer at Beaver Hall. After a quick beer in the stifling heat of the gallery we wandered out to the chaos of McCaul St. and looked at futuristic crops, what appeared to be the last supper, (and turned out to be a 12 hour consumption ritual) and attempted to hang out and watch movies at OCAD. 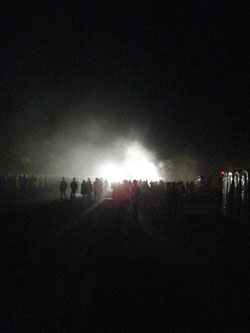 The tower shoot was the usual combo of excited people with cameras and the anal-retentive-faux-professional-photographers (ARFPP), trying to find the money shot form the tower. The excited people with cameras loved the LED lights illuminating the observation deck and the ARFPP bitched incessantly about it and the fact that windows were dirty. I was celebrating a one-week anniversary with my new camera and just played. There is nothing cooler than looking at the lights of the city from the second tallest free standing building in the world.

The rest of the night was like a race to see as much as possible, which conflicted with my usually habit of attending one event and staying all night. As a result we went West instead of East and watched Queen West. come to a close with the bars. By 5am while we were people watching from the steps of Woofitts, I could barely recount to a friend what we'd seen that night.

An hour later the dance party at Queen's Coin Car Wash that was sustaining the life of Zone C suddenly ended when their truck battery died and we resigned ourselves to the fact that it was over and it was time to go home.