"We seem to be made to suffer. It's our lot in life."
- C-3PO from Star Wars Episode IV: A New Hope
He just can't catch a break, shown above (a reproduction mask, anyway) decapitated all over again at Ian A. Anthony's Assembly a Galaxy exhibit at the Design Exchange.

In the relatively short time that I've been contributing to blogTO, it's rare that I've been able to reveal my true geek nature, but I'm thinking that this just might do the trick.

You might say 37 year-old Ian Anthony enjoys Star Wars. His personal collection of Star Wars action figures, reproduction props, posters, and set pieces will surely bring any child of the 70's or 80's back a few years to their childhoods.

Visiting Anthony's exhibit at the Design Exchange just a few weeks after the 30th anniversary of the series brought back fond memories and plenty of nostalgia in seeing all the action figures and memorabilia on display. 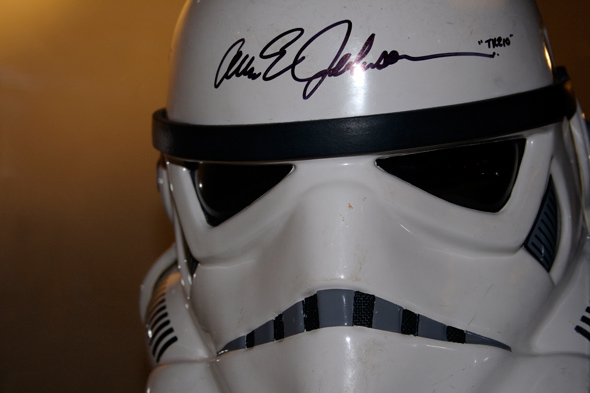 A helmet signed by Albin Johnson, the founder of the 501st Legion, AKA "Vader's Fist," an international organization of (usually) costumed Star Wars fans that attend charity events, film launches, and the like.

Believe it or not, Ian only started his sizable collection after the last Star Wars movie, Episode III: Revenge of the Sith. He didn't waste any time though, and began scouring eBay for new and rare collectibles, "Instead of trying to get every action figure, I tried to get the first editions; The first Luke Skywalker, C-3PO, and so on." 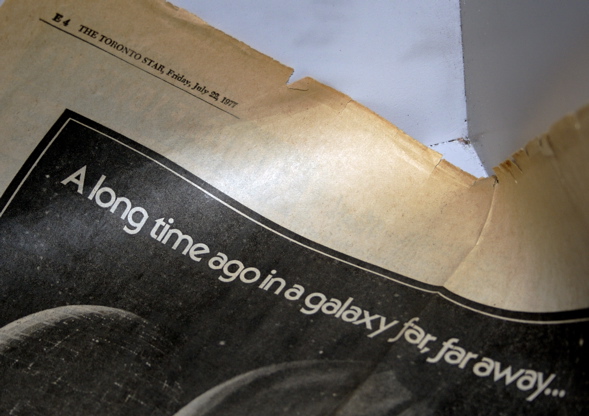 An advertisement in the Toronto Star on June 22, 1977, two days before the first film's launch date in Toronto.

The exhibit also has quite a few of local historical pieces on display, such as the ad shown above, tickets from the Toronto opening at the Odeon Finch Temple theatre, and handbills announcing the film's opening at the Varsity and Fairview theatres. 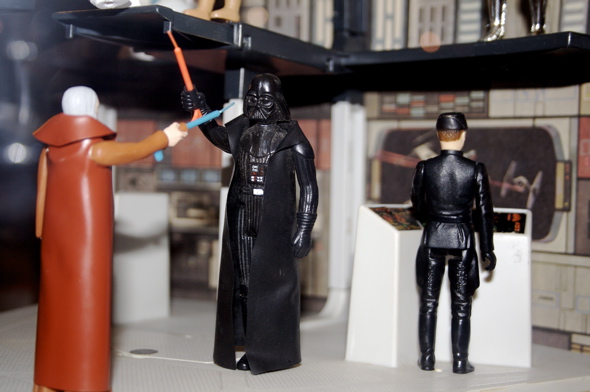 Original Darth Vader and Obi-Wan figures do battle inside the Death Star, the first Star Wars playset that stands at two feet tall, and comes complete with all accessories, instructions, and associated action figures. Fan boys, eat your hearts out!

What I found truly remarkable about the exhibit is that there's a story behind every collected piece.

Ian remembers the year of the first film's release, "In 1977, I was 8 years old, and my Mom was a religious person, so she didn't want my brothers or I to see it because she thought the Force was a negative influence." In an ironic side note, little did she know that around 20,000 Canadians would later mark their religion as 'Jedi' in the 2001 Canadian census.

As fate would have it, that wouldn't be the end to Anthony's run-in with the film, "In 1982 CBS started showing it on network television, and I was channel-hopping and caught it 20 minutes into the movie." With a quick close of his door, he was off to the races, "But it's probably good that I only started collecting now, since my parents would have had to spend a ton of money (buying the memorabilia) back then." 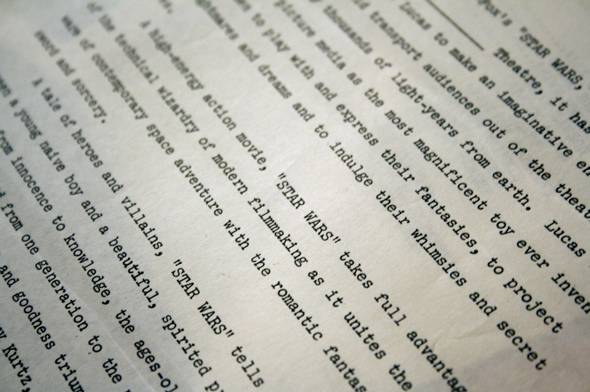 An excerpt from an original press kit from 1977 describes the movie's then whimsical and, as it turns out, highly revolutionary premise and themes. 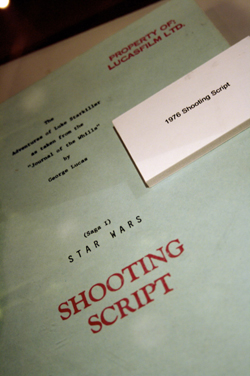 Other items at the exhibit include an original trailer still on the reel, a work print from the first film, a copy of Media Scene magazine (the first to feature Star Wars on its cover), X-Wing and TIE Fighter toys, and one of my favourites, a copy of the Star Wars The Empire Strikes Back video game for Atari that I played quite a bit as a kid.

Ian says he had a lot of fun putting together, and it shows after seeing his exhibit, particularly with "The Many Faces of Vader" display, which features around 20 different Vader action figures, going from his youth as Anakin Skywalker, through his transformation into Vader and battle with Obi-Wan, all the way until his death.

As for Ian's future as a collector, he has most of what he first sought to collect, but is still holding out for a couple pieces, "Most of my vintage collection is completed, but I'm still waiting on a few items."

Ian Anthony's personal collection of Star Wars memorabilia, Assembly a Galaxy, will be on display at the Design Exchange (234 Bay St.) until August 25. Hours of operation are Monday-Friday 10am-5pm, and Saturday-Sunday 12pm-5pm.