I grew up in an East African household with Indian ancestry, so while most of the words I learned growing up were in Swahili, there were a few Hindi words that were staples in any Indian-influenced household. Among those words were masala, because that's the mix we'd put in our food to make it tasty, mehndi, because my mom would apply henna to her hands for every festive occasion, and masti, because everytime I acted up my grandma would tell me to stop doing masti.

Using that as a starting point, it's pretty evident that Masala! Mehndi! Masti! â which kicks off at Exhibition Place tonight and runs until Sunday â will be a flavorful and festive mix of cultural expression, all with a little bit of naughtiness and wildness thrown in. 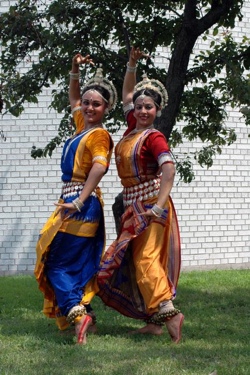 For those of you haven't been to a past Masala! Mehndi! Masti!, you've been missing quite a bit. The event, which moved to Exhibition Place last year after five years at the Harbourfront Centre, is one of the largest South Asian arts festivals outside South Asia itself, and last year boasted over 100,000 attendees and special presenters and performers from over twelve countries across North America, Asia, the Caribbean, and Europe.

With South Asians making up one of the largest visible minority group in the Greater Toronto Area, Indian food becoming a staple cuisine in North America, and the Bollywood aesthetic permeating all parts of popular culture, the popularity of M!M!M! is undeniable. At this year's event, you'll be able to enjoy some of the best South Asian food from some of Toronto's best restaurants, a bazaar featuring crafts by local artisans, a artists' walkway curated by Mukta Arts, midway rides and games, and of course, music and dance performances by some of the world's best South Asian artists.

A few activities at this year's festival that I plan on checking out include:

There's so much more happening over the weekend that it's impossible to mention them all, but do be sure to check out the DesiLit Writer's Cafe for various readings and workshops throughout the weekend and the Rahul Bose Retrospective where you'll be able to meet and learn from the celebrated actor and watch several of his films.

You can see the full M!M!M! schedule on their website. If any of you do plan on coming down to Exhibition Place for the festival, drop me an email: I'd love some company, and promise to buy you a dosa.