The National Ballet's Trio of Performances is Worth Wolfing Down

I've never before been to a ballet. Never had anything against them, but it just never seemed to pique my interest. Now in my 25th year, I find myself a little more open to some of life's pleasures that I'd previously discounted as, well, unpleasurable.

The National Ballet of Canada opened its summer season last night with a triple bill including two classics The Four Seasons and a company premiere of Polyphonia, followed by the first run of performances in the world of Matjash Mrozewski's Wolf's Court.

Bummed that Heroes and 24 are done for a few months? Got some cash and feel like doin' something classy? Well then maybe you should consider this trio of performances, and trust me when I say that the ballet isn't just for old farts with miniature binoculars on sticks anymore.

Though, you will see some of them anyways.

--
I'll cut the review into three separate bits, one for each specific ballet.

The opening show on the opening night of a triple bill, The Four Seasons had to set the tone for the evening and it had to start off with a splash. For the most part, it did. The opening season, 'Spring', featured ballet choreography that fell several yards from my preconceived notions of what constituted a ballet.

There were elements of modern and contemporary dance mixed in with those classical pirouettes that we all know. At one point the female dancers started doing what I would call "the zombified scarecrow walk", their arms stretched out and stiff with their hands limp, head tucked into their neck while they tip toed in circles. At another point they started doing what looked like "the thriller", circa Michael Jackson's not-so-creepy period in the early 80s. Add in a few booty shakes, which they did, and it's plain to see that the choreographers were reaching out to audiences that might not necessarily attend a classical ballet recital.

The costumes were great as well. The clothes changed between seasons, with shot and long dresses that caught the audiences eyes with every spin, baggy pants that wrinkled and touched the ground, down to the long winter coats worn by the male performers when dancing through 'Winter'.

Of the four seasons, Greta Hodkinson's performance in 'Summer' was the hottest. And I don't mean in an unclever pun way. It was hawt. The simple fiery red backdrop and the high contrast double sided lighting couple with the rapid fire spins, leaps, tosses and grabs had me enamored with her from May through August. It grabbed my vote for the most impressive performance of the night.

Sadly, it took one or two dancers a while to find their rhythm. During the 'Winter' season, one of the four male dancers providing the modern dance in the background had visible trouble holding his pose; he was shaking, hard core. Notably, one of red haired female dancers was a consistent half to full step behind. I'd watch her slowly catch up to the other dancers during the brief stints on stage before running off. I also found it odd that the male dancers were a lot lighter on their feet than the female dancers during the opening part of the ballet. Perhaps it was on purpose, but I didn't get that vibe.

This was the company's premiere of this ballet, viewed as one of the classics since it premiered in New York in early 2001. Polyphonia contrasts greatly with The Four Seasons, with all eight dancers dressed in more traditional looking purple and white leotards. The ballet consisted of 10 short dances, with music handled entirely by un-amplified solo pianist Andrew Burashko, whose fingers played a marvelous set.

While I didn't dislike any of the dances, two were particularly striking for separate reasons. The first dance, involving all eight of the ballet's performers, had an awesome yet simple lighting setup that involved casting the dancers' dark shadows against the background. As the moved back and forth, their shadows would shrink and grow accordingly. It was like a live iPod ad, with ballet dancers and a solo pianist. I totally recommend watching the shadows instead of the dancers, not that you'd be able to help yourself.

The other dance was a spotlit one in the middle of the set. I believe several dancers were involved, but Xiao Nan Yu was the contortionist star of the piece. Polyphonia was a general display of skill and technique compared to the flowing choreography of The Four Seasons, and the spotlit dance was the most blatant display of skill seen the entire night.

No visible faults could be seen during Polyphonia, with Heather Ogden putting in a noticeably strong supporting performance. Incidentally, Heather will be playing lead role in The Four Season's 'Summer' dance tonight, and in the evening shows on the 7th and the 9th. I'm pretty sure she'll do an admirable job in the role. 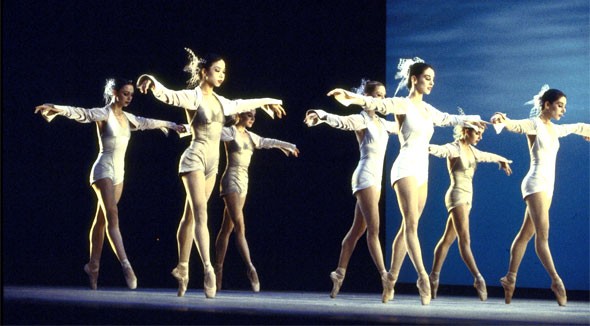 Closing out the night was a world premiere, and The National Ballet pulled out all the stops. The set and props were easily the most striking of the three performances, and the costume design was first rate. I won't spoil the opening moments, but yes, that is a person in the background. Long dress, eh? Props to Yannik Larivďż˝e for the set and costume design.

The gist is that there's a society of warriors who map out their points of conquest on the dance floor, using metal poles that they balance on the ground. The word of the day is "balance" folks, as the poles aren't stuck into any holes to keep them from falling over. Over a short period of time the dancers plot of so many "conquests" that it would make Alexander the Great blush.

And then the 15 odd dancers start jumping, twirling, weaving and dragging each other between the poles without hitting them or making enough of a collective "THUD!" to even cause a mild sway. The poles are also used as batons, and once the troupe gets moving with the batons, the excellent lighting setup makes itself plain for all to see. Seriously, it's quite a visual spectacle.

I'd like to note that the red head who had trouble earlier in the evening was spot on for this much more complex and demanding dance.

Wolf's Court seemed too short for such a strong ballet, but perhaps it's for just such a reason that it's as good as I could have imagined ballet could get. It doesn't drag and it doesn't let up. Once Stacey Shiori Minagawa takes the stage in strikingly different costume, Wolf's Court became the finale everyone wanted for the evening.

If you couldn't tell, I thoroughly enjoyed the performances, as did my wife. Guys, score some points with your gals and take'em to the ballet; you'll actually enjoy it too.

The National Ballet of Canada Present
The Four Seasons &Polyphonia & Wolf's Court
June 2 - 9, 2007
View which roles the performers are playing on specific nights

At The Four Seasons Centre for the Performing Arts
145 Queen St West
416-363-6671
info@fourseasonscentre.ca
Price varies, but you're looking at spending between $40-$150 depending on where you sit. The concert hall has some really good acoustics and universally good viewing angles, so don't bust a hump if you aren't front and center.