The Celebrity Persona at BCE Place

The BCE Atrium, with its arching ceilings and vast amounts of natural light, is one of my favourite places in the city to see photography. So today it was a treat to catch the opening of one of CONTACT's feature exhibitions, The Celebrity Persona: The Black Star Collection at Ryerson University.

Valerie Boileau Matteau, the curator for the exhibit, gave me a private tour and shed some insight into the process of selecting the images. We both agreed that our favourite photo was the one above showing Pablo Picasso at his 80th birthday party.

This one, like every photo on display at BCE Place was found by Valerie doing a search of the 300,000 photos in the printed archives. She would pick a category or name like "celebrity" or "Pablo Picasso" and in this case sort through the 300 plus images of Picasso to see if one met the criteria for the exhibit.

The photos eventually selected for the exhibit are a stunning collection grouped into themes like actors, artists and architects, political figures and scientists and inventors. Among the well known names represented include Salvador Dali, Bobby Kennedy and Jacques Cousteau. 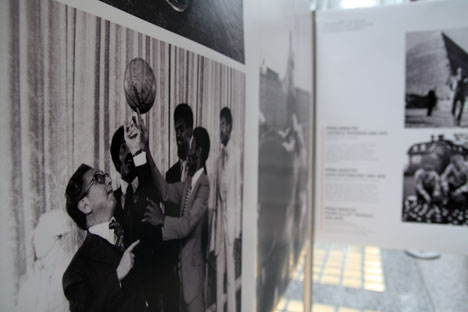 While all photos deserve mention, I'll just single out a few others. In the political spectrum, I was confronted by two unexpected shots. One, above, of Henry Kissinger with the Harlem Globetrotters, and another (not shown) of Donald Rumsfeld on a unicycle. The latter is truly one you need to see to believe. 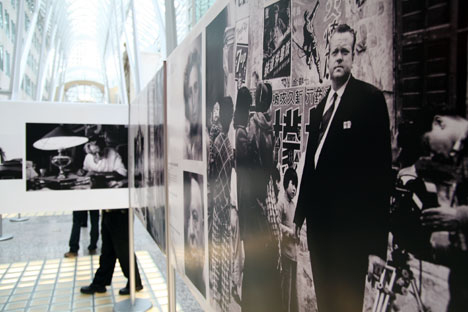 Finally, I was struck by the above photo of Orson Welles. Likes Picasso, the famous director has always been one of those larger than life figures that I struggle to believe actually existed in the real word and isn't just a hero of fiction.

The Celebrity Persona: The Black Star Collection at Ryerson University is on display at BCE Place (181 Bay Street) until May 25th.