OCAD is having it's graduate exhibition, Tour de Force, this weekend from May 11th to the 13th, and I'll be previewing my four picks of the litter over the next four days. How do I go about choosing which exhibits to feature? Well, I've had a look over everything, and I've made my decisions based on the awesome-o scale. The science behind this scale is shrouded in mystery, though, I assure you that the science is sound.

--
Justyna is of the mind "the absence of women in skilled labour is significant," and she wants to change this. Preferably sooner than later as she states that the Canadian labour force is expected to shrink dramatically by 2016.

"The Pink Nail campaign is an ongoing project intended to create awareness and support women entering and landing non-traditional employment. It introduces pink industrial nails into the market, making them available for purchase at industrial supply outlets like Home Depot, Rona, etc. to represent support for women in and entering these occupations. They will attract attention, and stimulate dialogue, communication and education. Visually, the nails represent the merging of genders in the industry. They carry a strong sense of solidarity, unity and acceptance. They encourage initiatives, empowerment and contributions to community involvement. The pink nail can be used in industrial, domestic or educational purposes. Proceeds will go towards grants for educating girls and women entering non-traditional employment." 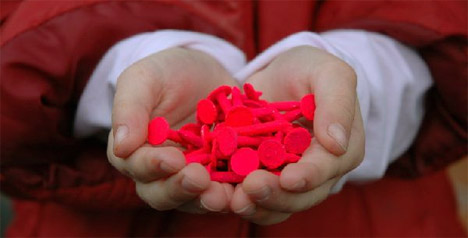 Unless your that new guy on The Bachelor (come on! He's like an airforce pilot, neuro-science genius, probably an astronaut, and I'll be there's even video of him saving an abandoned family of ducks from a waterfall that has a pile of sharp rocks on the bottom. If he seems that perfect, then he must be a sexist pig. It's the only thing that makes any sense in the world), it's hard to argue with Justyna's cause. The Pink Nail Campaign, as well as the other Tour de Force exhibits can be seen on OCAD's Main Campus from May 11th to the 13th.