OCAD is having its graduate exhibition, Tour de Force, this weekend from May 11th to the 13th, and I'm be previewing my four picks of the litter in the four preceding days. How do I go about choosing which exhibits to feature? Well, I've had a look over everything, and I've made my decisions based on the awesome-o scale. The science behind this scale is shrouded in mystery, though, I assure you that the science is sound.

The last OCAD Exhibit O'the Day is Molly Buckle's twisted project on recycling the nutrients provided by dead animal carcasses in the city into what they're most useful for. You may come across the occasional bit of road kill once in a blue moon, but most dead animals are cleaned up before long and cremated. While good for other animals and our noses, having the earth recycle these materials naturally tends to have its own set of inherent advantages. What to do??? Make sculptures that do the job instead, that's what.

--
Ever watch The Lion King? Well, more like The Lying King, but whatever. Either way there was a lot of talk about the circle of life. There was even an Elton John song about it.

If Elton John sings about it, you know it's important. Molly can't go ahead and plant dead animal carcasses in the ground, but she can try and raise awareness and get people thinking "what if". 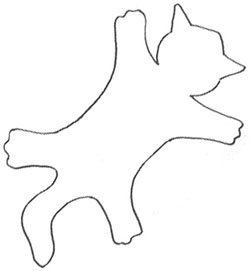 "It is important to source and cycle nutrients locally in order to help maintain a natural balance. My contact at the City has been collecting documentation so that sculptural works can be placed relative to where animals have been picked up. The sculptural work focuses on this need to cycle locally and serves as a counter-intervention to the intervention of the initial pick-up. The sculptures also play a role as monuments to nature within the city. The form will be the same from one site to another consisting of a spiral with built up walls that take the form of small columns. The spiral represents both natural cycles and forms found in nature. I have chosen to use organic fertilizers, leaves, and dirt as my materials for these time based works. I sourced my materials as locally as I could, some of them come from British Columbia but they are all still from Canada . They were the most locally available materials. The fertilizers I chose are referred to as soil amendment because the take a long time to become available for absorption, ranging from six months to four years. The works are designed to decompose and contribute nutrients relative to those that the animal carcass would have."

The locations of the sculptures aren't planned out, as it all depends on, you know, where the raccoons croak, so to speak. Molly's expecting people to stumble across at least one or two sculptures over the course of its run. Hopefully the sculptures don't fall victim to a hasty Civic.