Standing in the Round Room of the posh Carlu, my first thought was: I can't believe this place is full of nerds! After all, I was attending the 7th Annual Canadian New Media Awards: a celebration of the booming Canadian New Media industry. As the story goes, Toronto figures prominently in the industry's success.

Just under half of the nominees were Toronto-based companies or individuals, and by the time the awards ceremony (hosted by the hilarious Debra Digiovanni) finished, 7 out of 14 winners were from this fine city. 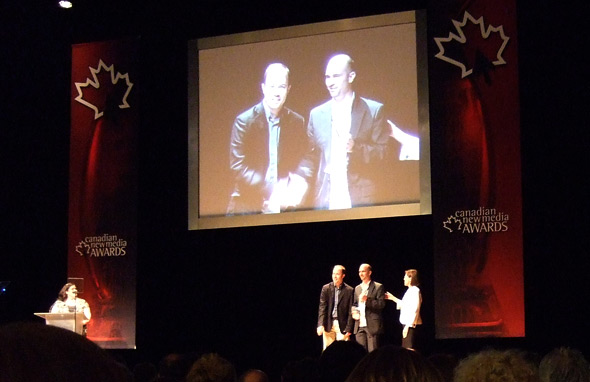 The awards ceremony itself was a shining example of New Media efficiency: nominees were named, the winner was announced, and no speeches were given. This had a two-fold effect: it cut out all of the boring stuff that no one really wants to hear, and it put most of the evening's emphasis on the fantastic food, drink, and networking in the main hall. I have to add that the catered food by Daniel et Daniel was the best I've had on the food and booze circuit... delicious! But enough about the food, I want to talk about the talented folks who helped put Toronto on the New Media map.

Producer of the Year: Matthew Hornburg from marblemedia, for The Art of Seduction.

Programmer of the Year: Ryan Andal for Crash Addicts.

Company of the Year: MyThum Interactive.

Congrats to all of the other winners as well!