Most of us rarely scream in public, let alone cluck like a chicken. Local personality Misha Glouberman seeks to remedy this problem with his 8 week class entitled Terrible Noises For Beautiful People: Cobra Edition. Attending provides a safe environment in which to act out. Part of Glouberman's stated interest in improv is providing a space where people can be loud together. However, this is no grade nine drama class. You won't be asked to act out the colour orange. . . well. . . maybe you will. But Cobra, from which the class takes part of it's name, is highly complex.

Cobra is a heavily ordered, rule oriented game system designed for musical improv by a man named John Zorn. I would describe it as an anarcho-syndicalist symphony using a complex code of hand signals and printed signage to coordinate itself. Individual members signal instructions, on the fly, to a conductor who will communicate those wishes back to the symphony as a whole. Terrible Noises takes this a step wierder by using Cobra on a group that is 100% vocals. Confused? So am I. Glouberman, clearly revels in this confusion and admits he himself doesn't fully understand it, but says he finds teaching a great way to learn things. 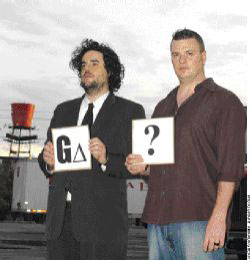 Running alongside the Cobra stuff are more free and emotive sound exercises designed to build up a catalogue of noises. Basing sounds on my favorite songs or movie sound effects made this part easy. I dropped a few Nine Inch Nails beats to great effect. My biggest contribution to the vocal soup was the introduction of samples, common in mid-nineties industrial music but virtually nonexistent in lesser forms of rock music. I did a short "stop" sample, based on Michael Keaton's "stop" in Batman 1989 - the one that brings the Batmobile to a screeching halt at his feet.

Terrible Noises is open to latecomers and those who wish to come out for one night only. While Cobra will take at least eight classes to grasp, screaming at the top of your lungs can easily be fit into one class. Though once you start, its hard to stop.